India’s superstar sprinter Dutee Chand is on a rift with the Government of Odisha. Her recent post on Facebook, where the two times Asian Games medallist announced to put her BMW on sale due to lack of funds for her Olympic training, has created a ruckus against the Govt of Odisha for not being supportive towards the athlete. Now, the govt has revealed the funds that were released for Dutee’s training purpose, and this has created a new clash between the two.

Last Saturday, Dutee Chand took to Facebook to put up her BMW 3 Series for sale with a couple of photos. The car, which costs Rs 40 lakh, was bought from the money Dutee had earned from her career achievements.

“Due to the ongoing pandemic all completions have been cancelled. Sponsorships for Olympics are also no longer there. I have spent all my money and haven’t earned anything in the last few months. There will be no new sponsors either during this time so selling my car is the only option left,” the 24 year was quoted by Cartoq.com as the reason for selling the car. 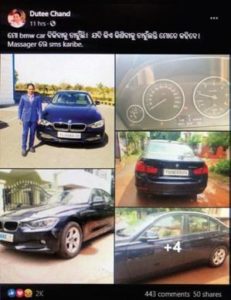 Dutee Chand’s deleted Facebook post on selling her BMW. (Image Courtesy: New Indian Express)The post went viral all over social media, while netizens were lashing out at the Odisha Govt, accusing them for not sponsoring Dutee’s training. However, the Union Sports Ministry and Odisha Government, both in charge of supporting Dutee’s training, got in touch with the athlete soon after.

Dutee later deleted the post and came up with a statement on her official Twitter handle, clarifying that unable to bear the expenses of a BMW made her decide to sell it.

However, on Thursday, the Department of Sports and Youth Services, Government of Odisha have revealed the amount of money that was released for Dutee, which has irked the sprinter.

“When I posted about selling my BMW car on Facebook, nowhere did I mention that I need money to fund my training…I kept that post till 10 pm on that night; but when I saw it was being misinterpreted and leading to controversy and negativity, I deleted it,” Dutee spoke to Times of India.

“I am disappointed now”, she continued, “because nowhere in the world or in India has anybody (governments) revealed to the media what amount of money has been spent in the training of an athlete, whether it is Hima Das, Neeraj Chopra, Abhinav Bindra or PV Sindhu.”

“Why am I being humiliated in the entire state?…I am disappointed about that…After that press release, everybody is saying that Dutee has a lot of money but is lying….My my self-respect is getting hurt,” the athlete concluded, lamenting that her image is being destroyed in this situation.

Exclusive with Laishram Thompson Kuman: Almost turned professional when I was just 15!

Italian Olympic runner Donato Sabia passes away due to Coronavirus!