Home News Nikki Bella rubbishes rumours that she broke up with John Cena for... 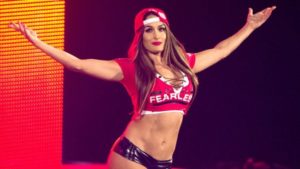 Following her attacks on Ronda Rousey this past Monday Night on RAW, Nikki Bella is back in the spotlight but this time off camera. The former two-time Divas Champion has slammed latest accusations that her break up with ex-fiance John Cena was fake and she did it for TV ratings.

Nikki and Cena ended their relationship earlier this year in April 2018. The couple had been together for six years and were engaged to be married before the duo decided to officially part ways.

Nikki responded to the ongoing rumours and said that she had been deeply hurt by these claims and felt like the critics were “literally just knifing it and just churning it”. In her defence, the 34 year old justified that she wasn’t prepared to sacrifice her career and ambitions for a relationship that required one of them to stop working.

During her time away from WWE, Bella has had a very prosperous stint as an entrepreneur along with her sister, Brie as the Twins have successfully built up their business and Women’s clothing brand, Birdiebee.

After dropping their friendship with Ronda Rousey last week, the next stop for the Bella Twins is the first ever all women’s PPV, WWE Evolution. Nikki has landed a one-on-one title opportunity against Rousey for the RAW Women’s Championship at the Nassau Coliseum on October 28 in Uniondale, NY.