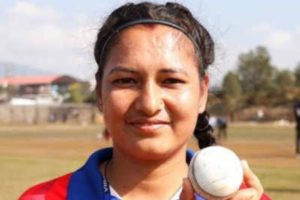 However, Anjali Chand surpassed her record with a magnificent bowling figure against Maldives. With the help of her brilliant bowling figure, Maldives were all out within 16 runs. As a response Nepal won the match with playing 5 balls only in the second innings of the match.

It was a match of Southeast Asian cricket tournament between these two sides. The other two sides participating in this tournament are Bangladesh and Pakistan. These four teams are playing with each other in Round Robin League system. The top two sides after the League will go for the Gold medal match and the bottom two sides will be rooting for the Bronze medal.

In Men’s Cricket, the record of best T20 bowling figure is held by Deepak Chahar who recently took 6 wickets against Bangladesh with conceding just 7 runs. The previous best was held by Sri Lankan mystery off spinner Ajantha Mendis.