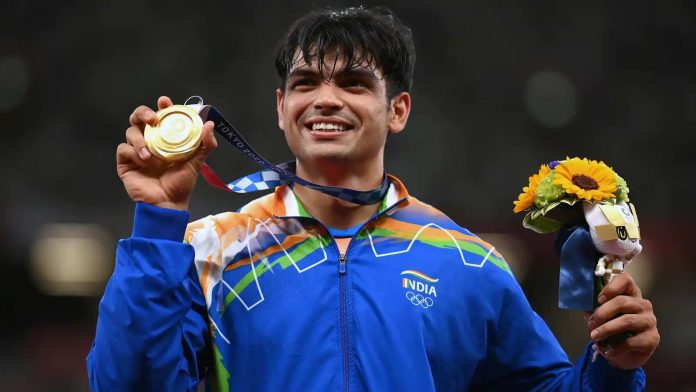 India’s beloved golden boy Neera Chopra, the star javelin thrower who bagged a gold at the Tokyo Olympic Games last year, has been nominated for the Laureus ‘World Breakthrough of the Year’, becoming the third Indian sportsperson ever to become a nominee for the coveted award after cricket legend Sachin Tendulkar and iconic wrestler Vinesh Phogat.

On 7th August last year, Neeraj Chopra made history by becoming the first track and field athlete and only the second athlete from the country ever, after Abhinav Bindra, to clinch a gold at the grand quadrennial event. The 24-year-old, who is a Subedar in the Indian Army, stunned the world when he threw an astounding 87.58 meters in his second attempt in Tokyo to bag the top medal.

A special feeling to be nominated along with some exceptional athletes for the Laureus World Breakthrough of the Year award.

Chopra has been shortlisted in this category alongside superstarts from other sports, such as tennis icons Emma Raducanu and Daniil Medvedev, FC Barcelona’s Pedri, triple-jumper world record holder Yulimar Rojas, as well as Olympics women’s 200m and 400m champion Ariarne Titmus.

“Neeraj’s win that night had me, Adille (AFI president Adille Sumariwalla) and all of us standing there in tears at the win,” World Athletics (WA) president and Laureus academy member Sebastian Coe told The Times of India, “And the tears then became tears of joy because the impact almost immediately that gold medal had on Indian athletics, Indian sport, with the celebration that kicked off within moments of that.”

“I’ve spoken to many of my friends in Indian athletics who were saying that for the first time in a long time, young people in India are talking about track and field and even thinking about a career in track and field where their first port of call would probably have been cricket,” Coe added.