The 26-year-old forward Tobias Harris recently turned down an $80 million extension offer from the Clippers, according to a report from TNT’s David Aldridge. Harris is set to enter the final season of the four-year, $64 million contracts he signed in July 2015.

While Harris turned down a significant amount of money, the 26-year-old likely wants to see what he can get on the market. According to Aldridge, Harris would be eligible for a five-year, $188 million max contract from the Clippers if he plays out the season and becomes an unrestricted free-agent. Another club could pick him up for four-year and $145.5 million in that scenario. 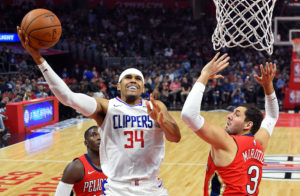 Of course, that doesn’t mean Harris is making the wrong decision by passing on an extension. If this bet on himself works, and he has a great season, then he could still push the salary of his next contract into the $100 million range. That would still be a massive success for him.

In 32 games for the Clippers, Harris averaged 19.3 points, 6 rebounds, 3.1 assists, and 1.2 steals per game while connecting on 41 percent of his three-pointers.