The Los Angeles Lakers are just not good enough without LeBron James. In his absence due to injury, they slipped to a surprise 119-112 loss to the New York Knicks at the Staples Centre. The Lakers did try to stage a late comeback, but the deficit from the first half was too big to recover. 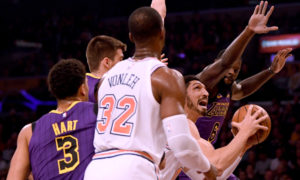 The Cleveland Cavaliers slipped to yet another loss, as the Utah Jazz defeated them 117-91 in the Quicken Loans Arena. It was a team performance from the Jazz, who had eight players with more than 10 points.

Karl-Anthony Towns’ 29 points and 15 rebounds powered the Timberwolves past the Magic 120-103 in Minnesota. Hassan Whiteside played a similar role for the Heat, as his 21 points and 18 rebounds propelled them past the Wizards 115-109.

Despite playing without Kyrie Irving, the Boston Celtics defeated the Dallas Mavericks 114-93 at the TD Garden. D’Angelo Russell had 23 points and 10 assists as the Nets defeated the Grizzlies in Memphis despite Mike Conley’s 31 points for them.

The Suns’ poor season continued as they slipped to a 121-111 loss to the Clippers in Phoenix. Victor Oladipo’s 36 points ensured that the Indiana Pacers claimed a 119-116 victory over the Chicago Bulls in overtime.

The Milwaukee Bucks routed the Atalanta Hawks 144-112 in a great team effort. Meanwhile, Paul George and Russell Westbrook combined for 68 points as the Thunder defeated the Blazers 111-109.