Kevin Durant had a mammoth game as the Golden State Warriors progressed to the Western Conference semi-finals. They defeated the Los Angeles Clippers 129-110 in the Staples Center in Game 6. Durant scored 50 points as the Warriors clinched a tough series. 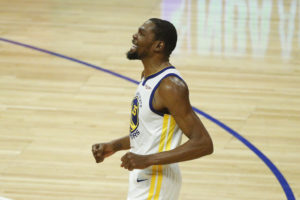 Not many expected the Clipper to put up a fight in this series, but Doc Rivers’ team had other ideas. They won two games, but the Warriors were better for them in the end. Durant was the main man in Game 6, and he scored the most points in a half of a playoff game in history. KD has 38 in the first half, which set the tone for the rest of the match.

Draymond Green had a triple-double, with 16 points, 10 assists, and 14 rebounds. Stephen Curry added 24 points, and the Warriors bounced back from their Game 5 loss. Danilo Gallinari top-scored for the Clippers with 29 points. Meanwhile, rookie Shai Gilgeous-Alexander scored 22 points for the home side.

The Warriors will face the Rockets in the next round. These two sides met in the conference finals last year, and the Warriors prevailed 4-3 then. It will be another tough series this time as well. That’s all the action from today, visit this space tomorrow for more of the same!