The Los Angeles Lakers’ playoff push got derailed even further as they slipped to a 110-105 loss against the Grizzlies. LeBron James recorded a triple-double and Brandon Ingram scored 32, but it wasn’t enough for the Lakers. Mike Conley Jr. top-scored for Memphis with 30 points. 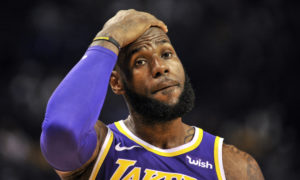 A triple-double from Blake Griffin powered the Pistons past the Pacers. It was the 7th win in their last 8 games, as they look to cement that playoff spot. The Blazers also blew a lead to the Cavaliers, before putting together a strong fourth quarter to claim a 123-10 win. C. J. McCollum starred for Portland, scoring 35 points.

The Warriors claimed an easy win in Charlotte, beating the Hornets 121-110. All of their starters were in double figures, as DeMarcus Cousins impressed. The Nets won as well, beating a poor Spurs side 101-85.

A team performance from the Suns carried them to a 124-121 win over the Heat in a close game. Meanwhile, 34 points and 21 points from Karl-Anthony Towns propelled the Timberwolves to a 112-105 win over the Kings. James Harden’s streak of 30-point games was broken, but the Rockets beat the Hawks nonetheless.

The 76ers scraped past the Pelicans for a 111-101 win, and the Mavericks lost to the Clippers despite a triple-double from Luka Doncic. That’s all the action from today, visit this space tomorrow for more of the same!