The Los Angeles Clippers are not backing down. If you thought that their Game 2 win was a fluke, think again. They beat the Warriors yet again, claiming a 129-121 win in Game 5 in Oakland. That result made the series 3-2, and the Warriors will head back to Los Angeles as they attempt to clinch the series. 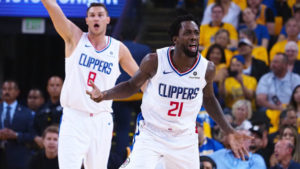 Lou Williams was once again the catalyst for the Clippers, and he had 33 points and 10 assists off the bench. The likes Montrezl Harrell and Danilo Gallinari chipped in, as the Clippers claimed an impressive win. Kevin Durant had 45 points for the Warriors, but a poor defensive performance saw them lost the game.

The winner of this series will face the Houston Rockets, who won their series 4-1 with the Jazz. Houston won 100-93 in Game 5 after the Jazz won the last game in Utah. James Harden had 26 points, and the Rockets got the job done to progress to the conference semi-finals.

The Jazz were poor, and could not generate enough offence to trouble the Rockets. The game was a low-scoring one, and it got a bit scrappy at times. That’s all the action from today, visit this space tomorrow for more of the same!