Let us take a look at the nine NBA matches that took place today.

The game of the day was played out in Los Angeles, as the Lakers lost 143-142 to the San Antonio Spurs in overtime. LeBron James missed two free throws at the death after tying the game in regulation, and Patty Mills’ game-winning jumper made him pay. Kyle Kuzma and LaMarcus Aldridge both scored 37 points, for the Lakers and Spurs respectively. 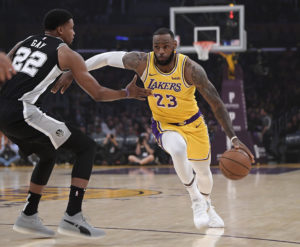 The Boston Celtics suffered a surprise 93-90 loss against the Orlando Magic in what was a low scoring game. Nikola Vucevic led the box score with 24 points and 12 rebounds for the Magic. The Mavericks defeated the Bulls 115-109 to keep Chicago winless.

The Raptors continued their unbeaten start in Toronto, beating the Charlotte Hornets 127-106. The Bucks are also unbeaten, as they beat the Knicks 124-113 courtesy of 61 points from Giannis Antetokounmpo and Khris Middleton.

Indiana was beaten by the Timberwolves 101-91 after a fourth-quarter spurt from Minnesota. The Jazz and the Grizzlies played out a defensive stalemate, where Memphis prevailed 92-84.

The Wizards beat the Blazers 125-124 in a thrilling game which went to overtime as well, which halted Portland’s winning streak. The Golden State Warriors got back to winning ways, as they beat the Phoenix Suns 123-103 in what was a straightforward home win.