The Golden State Warriors played out an incredible game against the Utah Jazz which ended in a 124-123 scoreline. Jonas Jerebko grabbed a late putback for the Warriors, which put away a gutsy Jazz side.

Kevin Durant and Stephen Curry together scored 69 points, which meant that Joe Ingles’ shooting night and Utah’s team performance was in vain. 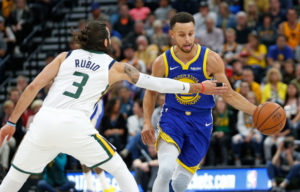 JONAS JEREBKO WINS IT FOR THE WARRIORS! #DubNation pic.twitter.com/LuIWFd2BiJ

The Orlando Magic scored just 31 points in the first half and the Charlotte Hornets defeated them 120-88 with relative ease. Caris LeVert scored the game-winning bucket as the Brooklyn Nets beat the New York Knicks 107-105.

In Minnesota, the Timberwolves handed a 131-123 loss to the Cleveland Cavaliers, which was their second consecutive one. The Toronto Raptors beat the Boston Celtics 113-101, which was a clash among arguably the two best sides in the Eastern Conference.

A high scoring game in Memphis saw the Grizzlies grab a 131-117 win over the Atlanta Hawks. The New Orleans Pelicans scored a mammoth 149 points to the Sacramento Kings’ 129 in a game where Nikola Mirotic scored a career-high 36 points.

The Milwaukee Bucks got their second consecutive win, courtesy of a 118-101 result over the Indiana Pacers. In Los Angeles, the Clippers won their first game of the season, where they beat the Oklahoma City Thunder 108-92 who were still without Russell Westbrook.