The Portland Trail Blazers showed that they can go toe to toe with the Denver Nuggets. They won Game 2 by a 97-90 scoreline to level the series at 1-1. It was a low-scoring game at the Pepsi Center, and Terry Stotts’ side dug in to claim the victory. 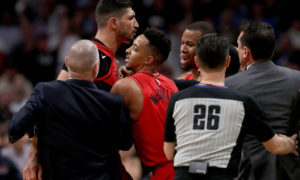 Damian Lillard has exploded in these playoffs, but he was relatively quiet in Game 2. The point guard scored just 14 points in the game. C. J. McCollum had 20 points and 6 assists for Portland. Enes Kanter also impressed, with 15 points and 9 rebounds. Portland led by 15 points at half-time, which was majorly due to the second quarter. They held Denver to just 12 points in that period.

Nikola Jokic had 16 points, 7 assists, and 14 rebounds for the Nuggets. Jamal Murray scored 15 points, but no one scored more than 20 for Denver. They did stage a late comeback, but the Blazers held on for the win. Game 3 will take place in Portland on Saturday.

The game dissolved into a scuffle late on, as both Kanter and Murray received technical fouls for their involvement. The high tension will give way to an intriguing series. That’s all the action from today, visit this space tomorrow for more of the same!