LeBron James scored 36 points as the Los Angeles Lakers cruised to a 123-107 win over the Chicago Bulls. Kyle Kuzma scored 21 for the Lakers, and Kentavious Caldwell-Pope added 24 himself. Chicago led 34-16 after the first quarter, but they imploded to hand the win to the Lakers. 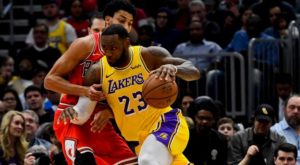 The Pacers snapped out of their losing streak as they defeated the New York Knicks 103-98. Bojan Bogdanovic top-scored with 24 points for Indiana, who survived despite scoring just 18 points in the fourth quarter. Meanwhile, Joel Embiid and Ben Simmons powered the 76ers to a 106-99 win over the Cavaliers. Simmons had 26 points, 8 assists, and 10 rebounds whereas Embiid had 17 points and 19 rebounds.

The Milwaukee Bucks won yet again, defeating the New Orleans Pelicans 130-113. Giannis Antetokounmpo had 24 points, as all of Milwaukee’s starters were in double figures. Elfrid Payton had a triple-double for the Pelicans.

LaMarcus Aldridge and DeMar DeRozan combined for 61 points as the Spurs beat the Mavericks 112-105. Jalen Brunson top-scored for Dallas with 34 points. Jamal Murray scored 30 points as the Nuggets claimed a 133-107 win over the Timberwolves. Karl-Anthony Towns had 34 points and 10 rebounds in the game.

The Blazers outscored the Clippers 40-20 in the fourth quarter to win 125-104 in Los Angeles. C. J. McCollum scored 35 points for Portland. That’s all the action from today, visit this space tomorrow for more of the same!