The Milwaukee Bucks are through to the Eastern Conference semi-finals. They beat the Pistons 127-104 in Game 4 to win the series 4-0. Giannis Antetokounmpo has been brilliant all season, and he made the difference yet again. He had 41 points and 9 rebounds as the Bucks won with relative ease. Khris Middleton added 18 for Milwaukee. 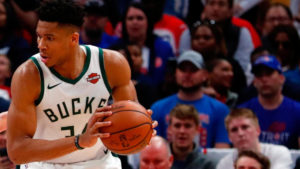 Giannis scored more than 40 points in a playoff game in less than 32 minutes, which is a first in NBA history. The Bucks will now face the Boston Celtics in the next round, in what should be a much tougher series. Boston also won their series 4-0, defeating the Indiana Pacers.

Meanwhile, the Utah Jazz won their first playoff game but it could be a case of too little too late. They beat the Rockets 107-91 in Game 4 and reduced the deficit to 3-1. Houston is still the favourite to wrap up the series when it resumes on Thursday. Donovan Mitchell starred for Utah, and he scored 31 points on the night. Ricky Rubio added 18 points and 11 assists.

James Harden scored 30 for the Rockets, but he failed to guide his side to victory. The Jazz have given themselves some hope with this win, but overturning the deficit is still a long way away. That’s all the action from today, visit this space tomorrow for more of the same!