The Sixers continued to round out their roster for the 2018/19 season after completing deals for Mike Muscala, Jonah Bolden, and Shake Milton during the week. Jackson played a total of 15 NBA games last season between Houston and Philadelphia, three of which were with the Sixers. 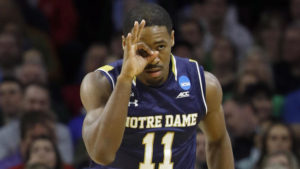 The 6-foot-1 Jackson, who spent three seasons at Notre Dame before being selected 45th overall in the 2016 draft by Boston, played with the Sixers summer league squad where he averaged a team-best 4.5 assists to go with 8.2 points in six games.

“I think just being vocal. I think trying to be vocal on and off the court,” Jackson said at the conclusion of summer league when asked what he focused on improving this offseason. “Trying to keep guys together even when we were down. A lot of times when I was down before I kind of shut myself out, so I felt more confident in that area. That’s just something I want to keep working on, keep working on my game, try to keep growing, keep getting better every day.”

Jackson was on a two-way deal with the Houston Rockets before being released and signing with the Sixers last season.