According to Shams Charania of Yahoo Sports, Marcus Smart and the Boston Celtics agreed to terms on a new four-year, $52 million contract. Celtics GM Danny Ainge was reported, “seriously engaged in contract talks” with Smart’s agent Happy Walters about a potential four-year deal with Boston, according to Wojnarowski. 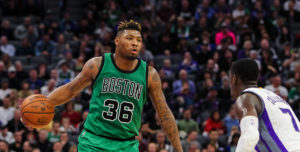 Smart had been frustrated with the lack of communication with the Celtics at the start of free agency. However, Ainge made it clear last week that Smart was the main focus for Boston this offseason.

“Our priority remains the same,” Ainge said last week. “Our priority is still Marcus [Smart] in free agency, and that’s where we are.”

The 24-year-old guard averaged 10.2 points, 4.8 assists, 3.5 rebounds and 1.3 steal for the Celtics in 54 games last season. He was a key spark off the Celtics’ bench who finished many games with the starting unit because of his elite-level defense.

Smart was drafted by the Celtics with the No. 6 pick in the 2014 NBA Draft.