Longtime San Antonio Spurs guard Manu Ginobili has been working out with the team this summer and given indications that he plans to return for a 17th NBA season, but that is apparently not a guarantee.

According to a Wednesday afternoon report from ESPN’s Adrian Wojnarowski, the Argentinian legend is seriously considering retirement. He’ll reportedly meet soon with his longtime coach, Gregg Popovich, to discuss his future. 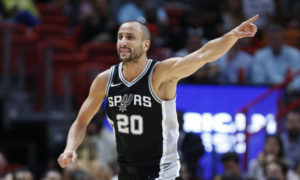 Ginobili, who was drafted by the Spurs in the second round in 1999 and played for the team since 2002, is still working out at the team’s practice facility and has one year left on his contract. A key part of four NBA championship teams, Ginobili played only 20 minutes per game last season, averaging 9.8 points.

The Spurs are reportedly hopeful that Ginobili will return, but the two-time All-Star and Olympic gold medallist would be returning to a roster also recently stripped of Kawhi Leonard and Danny Green.

NBA: Jordan Clarkson will not be able to represent Philippines in Asian Games