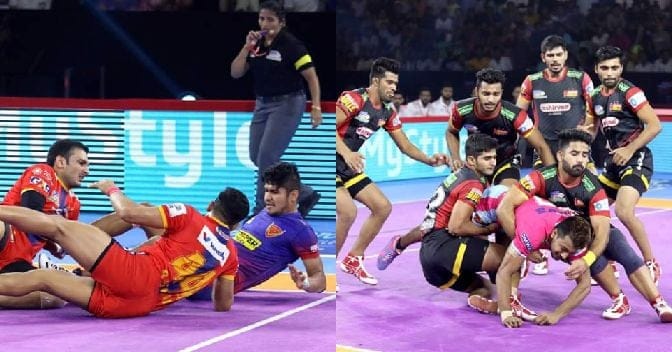 The second day of Delhi leg of Pro Kabaddi League season 7 saw a master class performance by raiders Naveen Kumar and Rohit Kumar who guided their team to a comfortable victory against their opponents. Hosts Dabang Delhi defeated UP Yoddhas courtesy performances by star raider Naveen Kumar and star defender Ravinder Pahal. Defending champions came back to winning ways after defeating table toppers Jaipur Pink Panthers who have now lost two games in a row. Captain Rohit Kumar and Defender Mahendra Singh, Mohit Sherwat and Saurabh Nandal showed competence as each one of them completed a high-five. 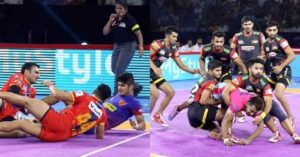 Defending Champions Bengaluru Bulls and table toppers Jaipur Pink Panthers who had suffered loss on the first day of the Delhi leg had a chance to win big in their second game. A complete all-round performance by the Bulls team helped the decimate the Jaipur Pink Panthers. The pink panthers tried making a comeback but where unsuccessful in doing so as the game was long lost.

Two in two games at home helped the Dabang Delhi leapfrog the Jaipur Pink Panthers to take the top-spot. A mighty good performance by the star raider Naveen Kumar who scored 16 raid points and the star defender Ravinder Pahal who scored 5 tackle points. Naveen was complemented well by Chandran Ranjith . The silver-lining for the Yoddhas was the form of Monu Goyat who came back in form courtesy a super-10, but that wasn’t enough for them to win the game.