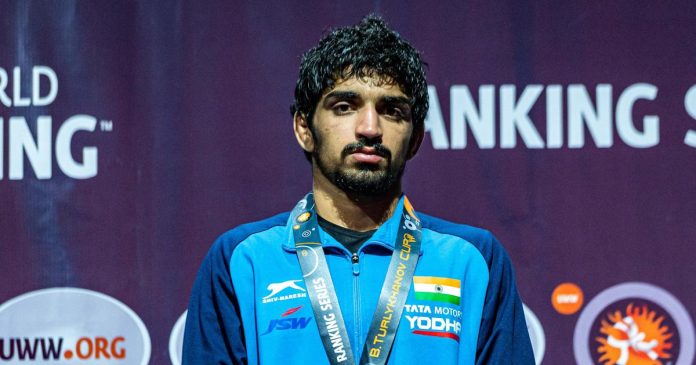 On the opening day of the National Wrestling Championships at Rajiv Gandhi Indoor Stadium on Wednesday, World Under-23 champion Aman Sehrawat won his semifinal and final bouts to retain his title in the men’s freestyle 57kg category.

With his grit and attacking game, Aman of the Chhatrasal Akhara in Delhi, wriggled his way out of tough situations. After falling behind three times against Atish Todkar, Aman defeated him 11-7 with excellent endurance and engaging skills. After going down 5-6 in the final against Udit, Aman posted an 11-6 victory by securing three takedowns.

Satyawart Kadian, a multiple-time Asian Championships and Commonwealth Games medallists, was handed a major upset by Punjab wrestler Sahil. In the 97kg final, Sahil fought back from a 4-3 trail with two minutes left and showed strong defense and quick counterattacks to win 6-3.

Sujeet Kalkal, a World junior bronze medalist, won by a convincing 10-0 margin against Utkarsh Kale in their 65 kg outing, while an experienced Narsingh Yadav was defeated 11-0 by Sagar Jaglan on his debut in the 74kg title match.