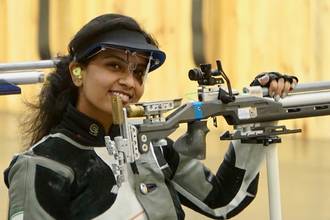 Delhi girl, Rajshree Sancheti won gold in the women’s air rifle category at the 64th National shooting championship in Bhopal on Tuesday. She defeated Himachal Pradesh’s Zeena Khitta by 1.7 point. The spectators and her opponents alike were impressed with her consistency in her last six shots. Her last two shots 10.5 and 10.4 propelled her to win the competition. She had the most consistent shots among the 599 shooters.

The world champions and record holders’ performances were not something to write home about. Elavenil Valarivan, former World no 1 and an Olympian, missed out on the finals by 0.6 points and was placed 12th with 626.8. Another Olympic medallist and world record holder, Apurvi Chandela, secured the 167th place with a total of 617.3. She had quite a disappointing fifth series performing below par 98.7. Anjum Moudgil attained the 35th place after 623.8. Anjum is a World Championship silver medalist.

Narmada Nithin defeated Zeena Khitta by 1.7 point to win the junior gold. She scored a perfect 10.9. Shreya Agrawal had made quite an impression after topping the qualification round but she slipped to the third place to win bronze at the event. Aayushi Gupta missed the medal by a half a point.

Results at a glimpse