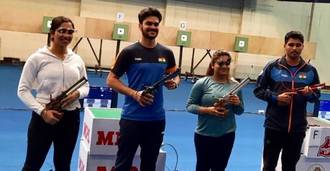 At the 64th National shooting championship, both Arjun Singh Cheema and Arshdeep Kaur have won gold in the mixed air pistol category for Punjab. The duo beat Saurabh Chaudhary and Devanshi Dhama by 17-15. The event took place at the Karni Singh Range, Tughlakabad, on Monday. The most surprising aspect of the entire event was that Olympic champions Manu Bhaker and Abhishek Sharma finished in sixth place after the second round. It goes without saying that the duo did not win any medal. Ruchita Vinerkar and Arjun Das won bronze after defeating Tamil Nadu’s Ravi Varma and Shri Nivetha 16-8.

Hopes were riding high on Shweta Singh and Amanpreet Singh. In the qualifying rounds for ONGC, both Shweta abs Amanpreet had come first, but they could not recreate their performance in the final round. Both of them exited the game after finishing seventh. The mixed air pistol junior round was dominated by Sarabjot Singh and Rhythm Sangwan. Saurabh Chaudhary and Devanshi Dhama lost to them 8-16.
Shiva and Shikha Narwal won the youth gold. Devanshi Dhama did not go empty-handed either. She clinched the bronze medal with the help of Monu Kumar.