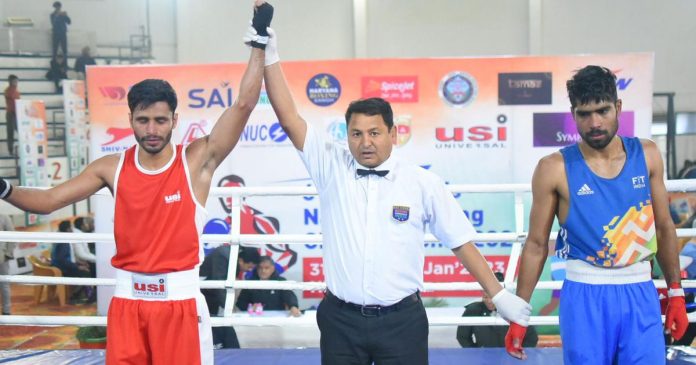 2018 Commonwealth Games gold medalist Gaurav Solanki has sailed into the quarterfinals of the National Boxing Championships following a resounding victory against Harendra Singh in their 60kg round of 16 outing at Hisar on Tuesday.

Solanki posted a dominating 5-0 win over Harendra, displaying fine attacking skills with control over the proceedings. On Wednesday, his quarterfinal clash will be against title holder Varinder Singh, the two-time and defending champion.

An Asian bronze medal winner representing Railways, Varinder earned his way into the last eight after outperforming his challenger Ibrahim Mohammed from rival unit Services with a 5-0 whitewash.

The quarterfinal bout between Solanki and Varinder will be one of the most anticipated fights of the evening. Among the boxers who made it to the final eight are Worlds bronze medalist Manish Kaushik (63.5kg), Commonwealth Games bronze medalist Mohammad Hussamuddin (57kg) and Asian bronze medalist Govind Sahani (48kg).