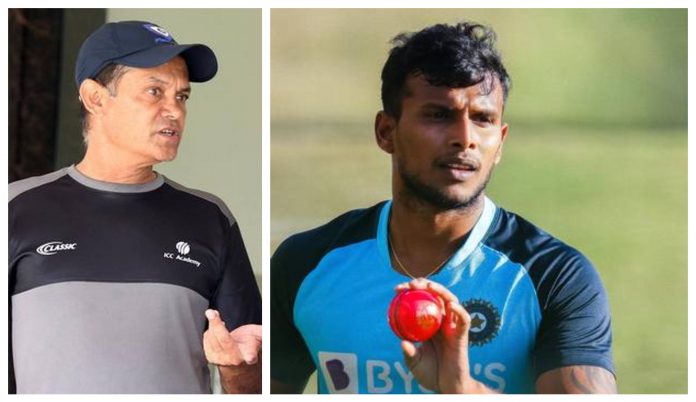 T Natarajan’s story has been nothing short of inspiring ever since his yorker-filled IPL campaign. The left-arm quick was slotted into the national team for the tour of Australia and has already made his debut in the limited-overs format of the game. After initially being drafted as a net bowler, Natarajan could well make his debut during the third Test of the Border-Gavaskar series.

Injuries to Ishant Sharma, Mohammed Shami and Umesh Yadav have forced the Indian team to go deep in their possible list of bowling options. After the success story of Mohammad Siraj in the Boxing Day test, another debut is in line for the Sydney test as well.

While Natarajan made a lasting impression, especially in the T20 series against the hosts, his red ball credentials are doubted by many. With his primary skills involving yorkers and slower balls, doubt has been cast over Natarajan’s ability to play test cricket. The pacer’s coach also reiterated the doubt while speaking of the talented youngster in an interview with the Indian Express.

“See, I am very happy for him and want him to play Tests and wishing him success. But I am not saying he is going to be immediately successful. He has to learn and I am sure he is a quick learner. We have to see if he is ready for Test cricket. It will depend on how he grabs the opportunity (if it comes),” coach Diwakar Vasu claimed

Vasu also added that in order for Natarajan to be successful in this format, he has to work on swinging the delivery. The coach feels that the 28-year-old does not possess enough pace in his arsenal that can be deployed to terrorise the batsmen with deliveries like the bouncer.

“He needs to swing the ball. He needs to bowl a more consistent line. He also needs to cut the ball (off the seam). Test cricket is not easy. Not many of these slower balls and yorkers are going to be effective as far as Test cricket is concerned.

“And I don’t think that at his pace (around 130kph), bouncers could be a (wicket-taking) option. I think (if he plays), he needs to bowl up, work on his swing, work on his angles. That would be a better option for him,” the coach opined

To conclude, Vasu stated that Natarajan could very well be used as the third seamer alongside Jasprit Bumrah and Mohammad Siraj for the final two tests since he is a quick learner.