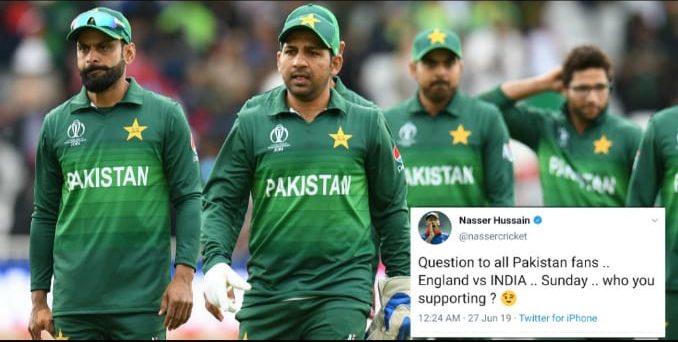 India is unbeaten in the ongoing World Cup for six games in a row. But on Sunday, India will be up against hosts England. 30th June will see two favourites of the tournament lock horns to seal the spot in the semi-finals. If India wins, it will seal India’s spot in the semi-finals, and also leave Pakistan with a chance to make it to the top four. However, an English win will send Pakistan packing. Furthermore, Naseer Hussain asked a question to all Pakistan fans on Twitter. His question has created quite a stir on Twitter.

“Question to all Pakistan fans …England vs India…Sunday… who are you supporting?” read the tweet.

Question to all Pakistan fans .. England vs INDIA .. Sunday .. who you supporting ? 😉

The response to this tweet saw a lot of support for India. The replies saw Pakistani fans supporting ‘neighbours’ rather than ‘invaders’. The former English captain unknowingly brought the fans of the rival nations together.

I will support to our neighbors against East India company

Is that even a question? pic.twitter.com/CenAXF1A47

Time to support our neighbour 🇮🇳

All the best 🇮🇳

Currently, England’s chances of making to the last four are remote. This comes on the back of two consecutive defeats against Sri Lanka and Australia. Another defeat would hurt England even more.