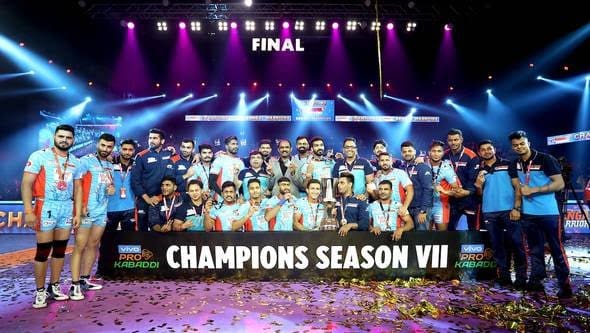 The Bengal Warriors pipped the Dabang Delhi K.C in an enthralling finals at the EAK Trans-stadia in Ahmedabad. The Bengal Warriors weren’t helped as their captain Maninder Singh was ruled after dislocating his shoulder in the group stage game against Haryana Steelers after which the superstar raider didn’t play. The Naveen Kumar led- Dabang Delhi K.C inflicted an early all out on Warriors but after that it was the stand in captain Mohammed Nabibaksh who came in hard and fast to inflict an all-out on Dabang Delhi K.C which gave Warriors a one point lead going into the half. 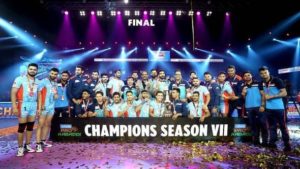 It was yet another super-10 by the star Delhi raider Naveen Kumar who eventually took 18 raid points and helped the Delhi franchise to inflict an early all-out on the Warriors but then it was the Hegde and Stand-in captain Nabibaksh show which helped Warriors take lead at the end of the first half. The Delhi defense didn’t respond well as Ravinder Pahal , Vishal Mane and Joginder Narwal could only collect 2 points in total and their inability to revive Naveen Kumar led to Warriors taking an early lead and defeat the Dabang Delhi K.C in the big finals of Pro Kabaddi League Season 7.

Bengal Warriors became the fifth team to win the coveted Kabaddi League in the world after it was inagurated in 2014. The Warriors performance was due to perseverance of both youth and experience as the Warriors team had a proper mix of both types of Players which helped the win the title for the first time. Before the Warriors it was Jaipur Pink Panthers, U Mumba , Patna Pirates who won it 3 times and Bengaluru Warriors who won this title.