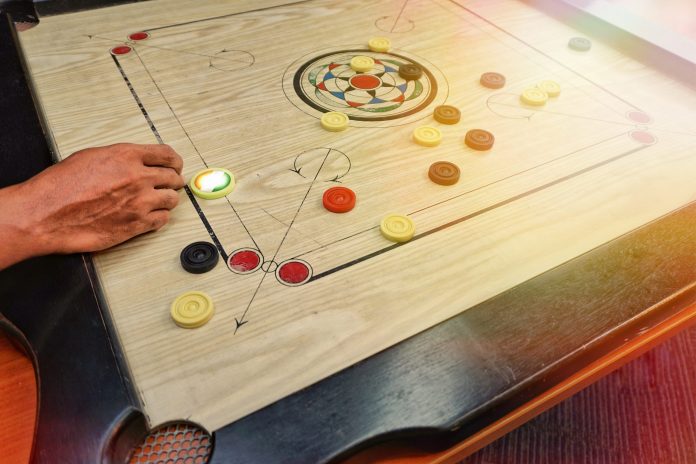 Carrom board is a popular indoor game that has its roots in the lands of India. Some of the popular indoor games that people love to play include ludo, chess, etc and they can be played either individually or in doubles. Carrom requires a large wooden board with all the arrows or directions, lines, and pockets in each corner of the board.

It usually requires 18 round-shaped carrom men, out of which, 9 are white and 9 are black. It also includes one round-shaped queen of either red or yellow color. A heavy large piece is also available, which is known as a striker.

Carrom is a game of skills, accuracy, and full entertainment. The main aim of the player in carrom is to sink all the coins in pockets before your opponent does. But it is important for you to learn carrom foul rules.

The objective of the carrom

Basic rules of the game of carrom

In the first turn, the player has the opportunity to break the central group of the counter, which is to disturb the counter. No matter whether the players hit the striker or not and which piece it hits, if a striker hits the queen in the first turn and the carrom men of his color, then retrieve the striker and take another strike. If the player doesn’t sink any pieces or commit a foul, the turn of the player is over.

Other Rules of the game of carrom

When carrom men or pieces overlap in the board, it will be put above another piece in the innermost circle. If pieces are on the edge or overlapping another carrom men, then their position should not be changed. It will be changed later while playing the game.

If the striker is stuck between other pieces, then it will be removed with the slightest disturbance without making any movement to the carrom men.

It is common to put the pieces in the center to disturb the opponents.

Following are the situations when carrom foul rules are used.

Carrom is played to enhance the skills and also it is played to win exciting rewards. You can install the GetMega gaming platform to win the carrom game. Carrom foul rules are also explained before the game starts, therefore, you can play without any worries on GetMega.