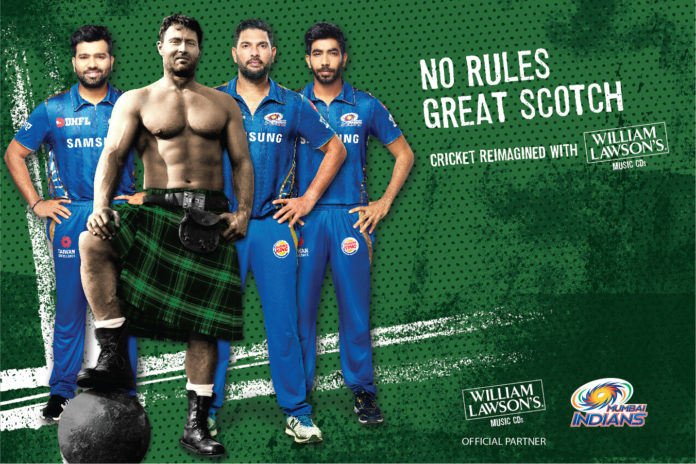 Mumbai, 20th March, 2019: William Lawson’s scotch whisky by Bacardi India, has partnered with Mumbai Indians as their official sponsor for the upcoming cricket season. The partnership will see William Lawson’s as the official partner for all the VIP pavilions at the home turf- Wankhede Stadium, including driving engagement through activities. The brand logo will also feature on cheerleader uniforms and their podium all through the season.

To bring alive the brand’s “No Rules” attitude, Mumbai Indians’ team members will feature in an edgy, topical content series on cricket under ‘No Rules – Cricket Reimagined with William Lawson’s’. Kiosks that engage with fans through challenges and games, where they could win some of the brand’s signature bold merchandise at the stadium, is another highlight to watch out for.

Additionally, the collaboration will see a host of ON TRADE and OFF TRADE promotions like free Mumbai Indians’ merchandise and tickets to Mumbai Indians matches being given away at different outlets. ON TRADE engagement will also include an exciting range of #No Rules activities, games and activations with the William Lawson’s brand mascot ‘The Highlander’.

Anshuman Goenka, India Marketing Head, Bacardi India, said, “William Lawson’s has always championed sports associations across the globe. With this Cricket tournament being one of India’s prime sporting events, we strongly feel that this association will pave the way for both, the team and the brand, to engage differently with its audience base. The team’s vigour and persona resonates well with William Lawson’s unconventional and edgy ‘No Rules’ brand personality. Our association will be a unique mix of bold branding and engagement that we are confident our audiences will enjoy. This is one of our first collaborations in India and we are extremely excited for the road ahead.”

Mumbai Indians spokesperson said, “Mumbai Indians are delighted to bring on board William Lawson’s as our official partner and look forward at creating exciting and innovative ways to connect with fans through breakthrough on-ground activations.”

Mumbai Indians began the season with a match against Delhi Capitals on 24th March, 2019, at the Wankhede stadium in Mumbai.

Bacardi’s William Lawson’s is one of the fastest growing value Scotch brands in the world and the number one imported spirit in Russia. Introduced in 1849 by William Lawson, it is a classic blended scotch whisky with a sweet and medium-bodied in style. At its core is the single malt of Macduff distillery, married with various bold malts and grain whiskies with a fruit forward character – no peated whisky is added. The portfolio consists of William Lawson’s Finest Blend, 12-year-old Scottish Gold, 13-year-old Bourbon-Cask-Finished and Super Spiced – whisky infused with vanilla and spice.

Bacardi Limited, the largest privately held spirits company in the world, produces and markets internationally recognized spirits and wines. The Bacardi Limited brand portfolio comprises more than 200 brands and labels, including BACARDÍ® rum, the world’s best-selling and most-awarded rum, as well as the world’s most-awarded spirit; GREY GOOSE® vodka, the world’s leading super-premium vodka; DEWAR’S® Blended Scotch whisky, the world’s most-awarded blended Scotch; BOMBAY SAPPHIRE® gin, the top-valued and fastest-growing premium gin in the world; MARTINI® vermouth and sparkling wines, the world’s leading vermouth and the world’s favorite Italian sparkling wines; CAZADORES® 100% blue agave tequila, one of the most popular premium tequilas in Mexico and the United States; and other leading and emerging brands including WILLIAM LAWSON’S®, the fastest-growing global Scotch whisky brand; ERISTOFF® vodka, one of the fastest-growing vodka brands in the world; and ST-GERMAIN®, a super-premium elderflower liqueur. Founded 157 years ago in Santiago de Cuba on February 4, 1862, family-owned Bacardi employs over 6,000 people, manufactures its brands at 27 facilities and sells in more than 150 countries. Bacardi Limited refers to the Bacardi group of companies, including Bacardi International Limited.