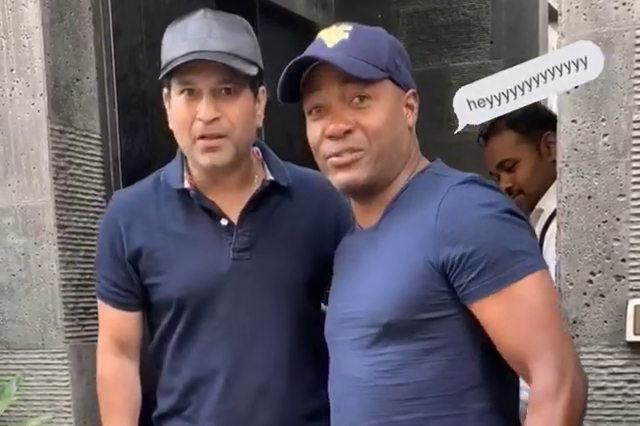 On Friday, West Indian batting legend Brian Lara paid the ‘Little Master’ Sachin Tendulkar a surprise visit.  Tendulkar uploaded a picture of them on social networking sites Twitter and Instagram with a meesage, which read “Great way to welcome the weekend … surprise visit from a good friend. Chillin’ with #BrianLara #FridayFun.” The post quickly amassed over 300,000 and 20,000 likes on Instagram and Twitter respectively.

Great way to welcome the weekend … surprise visit from a good friend. Chillin’ with #BrianLara 😉 #FridayFun

The two legends share more than 55,000 runs between themselves. The God of cricket has 15,921 Test and 18,426 ODI runs to his name, making him one of the most prolific batsmen to have played the game. While Lara, on the other hand, holds the highest score of an unbeaten 400 in the longest format of the game.

Lara is currently in India amidst West Indies’ ongoing tour. The two teams have already played out the Test series, which the hosts won 2-0. While five ODIs starting from October 21 at the Baraspara Cricket Stadium in Guwahati and three T20s later starting from November 4 are yet to be played.