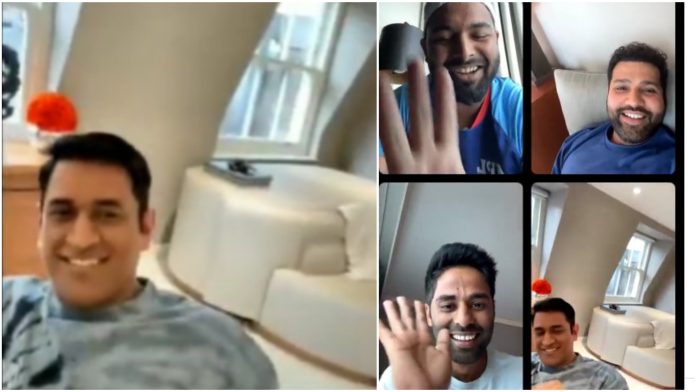 The Indian cricketing legend MS Dhoni is not active on his social media accounts. However, a glimpse of a few seconds is enough for him to make an impact on the hearts of millions of fans. He was recently seen during an Instagram live video of the current Indian wicketkeeper-batter Rishabh Pant. In a video being widely shared on social media platforms, Dhoni can be seen hiding his face with his hands as the camera is panned towards him. The Live session also featured the current Indian captain Rohit Sharma and star batter Suryakumar Yadav.

MS Dhoni was seen for a few seconds Dhoni’s wife Sakshi can also be seen in the video but it looked like she also did not want to show her face. Meanwhile, current India skipper Rohit Sharma can be heard as saying ‘Mat Kar Yaar’ probably to the person handling the camera.

Dhoni recently celebrated his 41st birthday in UK and the Indian wicket-keeper and batsman Rishabh Pant was spotted at the party. It was quite interesting to witness Rishabh Pant in attendance. The party also featured Dhoni’s family and friends. Earlier, the former Indian captain was also snapped at Wimbledon 2022, enjoying some tennis action from the match between Rafael Nadal and Taylor Fritz. MS Dhoni was seen wearing a grey blazer and white shirt and also sported black shades. MS Dhoni is gearing up to represent Chennai Super Kings(CSK) all again in the 2023 Indian Premier League (IPL).

Meanwhile, the Men in Blue are currently playing West Indies in an ODI series and have already clinched the series. Team India will look to finish the third and final 50-over encounter on July 27 (Wednesday) flawlessly. After the ODI series, the visitors will take on the Men in Maroon in a T20I series with permanent skipper Rohit Sharma leading the Indian team.