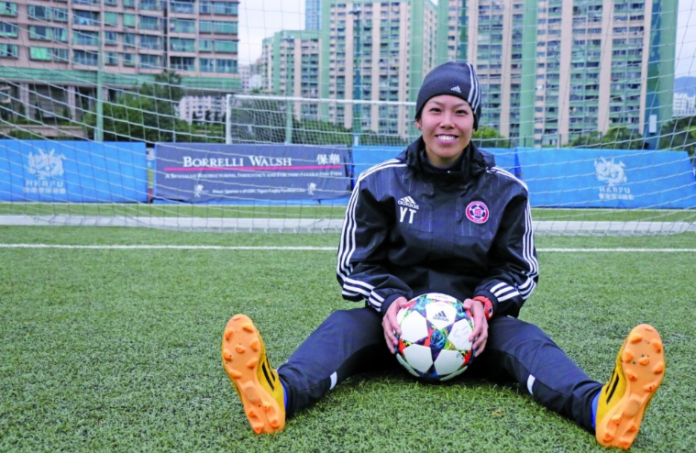 It doesn’t seem likely that women’s football will get more popular than men’s: despite the fact that a hundred years ago, in England’s “birthplace of football,” it was no less in demand, as there were hundreds of women’s teams, prejudices pushed it to the sidelines, rejecting the development of sports for many years. Now, the reputation of women’s football has been tarnished by sexism and is gradually restored, but even in countries where women’s teams achieve more than men, the level of audience interest, and, as a result, the salaries of players, coaches, and functionaries are incomparable with those that are typical for men’s football.

The women discussed below were not willing to wait for the status quo to change. They came to men’s football despite the prejudices – and won respect even of those who initially did not take them seriously or considered the gender barrier in the most popular game of the planet to be insurmountable.

Corinne Diacre was not the first female coach to lead a men’s team: rumor attributes this achievement to the former Croatian national team player Tihana Nemcic. But the story of Nemcic and the club of the fifth Croatian division, which formally represented a village with a population of about 250, suffers inconsistencies and looks more like a badly crafted newspaper sensation. And there was also Helen Costa who was a trainer of Clermont for just fifty days: after not having spent a single official match as a coach, she quit, hinting at the sexist atmosphere in the club in a very transparent way. The Diacre that replaced her has a completely different story: she managed the team of a relatively high professional level (second French league) for three seasons, simultaneously fulfilling the duties of a sports director, and forced others to treat herself as a professional, not just an “exotic experiment” of the club president Claude Michy.

If Diacre had no trophies in her career in football, then Chan Yuen Ting coped with the task of getting one in the first six months of her career. In the biography of a native of Hong Kong, there is everything that is necessary for a life-affirming biopic: being a fan of David Beckham in her youth, against the wishes of her parents, she received a sports education in addition to a diploma of a geographer; having started from the junior level and worked as an assistant, by 2015, Yuen Ting had grown to the post of head coach. Having headed the Eastern club, Chan brought it to the title of champions of Hong Kong (which had never happened to the club for twenty years) and entered her name in the Guinness Book of Records. However, one cannot truly exalt her achievement: as the level of Hong Kong club football is still low (and the country’s national team occupies the 144th out of 211 places in the FIFA ranking), and the competition among coaches in the country is not that huge.

In a big business with a multi-billion-dollar turnover, such as modern football, the agents leading the players and coaches have become an extremely influential caste. Women are relatively new to this, and the first one among them was Rachel Anderson. By 1997, she was widely recognized by male her male peers (several years earlier, she arranged for the transfer of West Ham defender Julian Dicks to Liverpool for £3 million, setting a new record for the English Premier League). English Football Association: an organization that itself sent an invitation to Anderson, forgot to inform her that the rules prohibit women from attending their own meetings. Two years later, having spent more than 200 thousand pounds, Rachel through the court has made the abolition of discriminatory practices.

Anderson has repeatedly had to deal with misogyny in football, but the iron grip and inflexibility in the negotiations have made their impact. “Football needs more women,” she said. “There are many true professionals among us. It is not necessary to know the whole inside of the game – you need to understand the negotiations and be able to find a common language with people. And I’m doing great at it.”