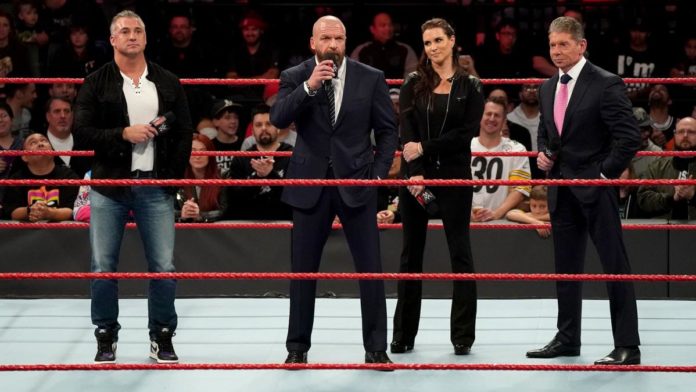 The McMahon Family is back in control of Monday Night RAW!!!

Vince McMahon and Co. dropped a bombshell as he announced that himself along with Triple H, Stephanie and Shane McMahon will all be assuming the leadership of the red brand and similarly, also apologized for the poor showing and drop in ratings of RAW in recent months.

Meanwhile, Triple H also promised the introduction of new superstars and fresh matchups every week before The McMahons were interrupted by former General Manager Baron Corbin.

Corbin made his way out to plead his innocence but the Lone Wolf was welcomed by a sea of resounding boos from the WWE Universe, almost making it impossible for him to present his case, however, he did request a second chance.

After discussing it among themselves, Triple H decided to give Corbin the opportunity and if he won his following match against Kurt Angle, he would be handed the reigns as the permanent RAW GM.

What initially began as a standard one-on-one battle between Baron Corbin and Kurt Angle, instantly produced a huge turn of events. Triple H announced midway through that the match was now under handicap rules until Shane McMahon made his way out and made it No DQ.

All four superstars laid their fair share of beating on Corbin along with special guest referee Heath Slater as Angle capped it off with the Angle Slam for the win but things got even worse for the former RAW GM when he was driven through a table after the match.

In an evenly contested affair, Dolph Ziggler gained the upper hand early on and had several near falls but was unable to lay rest to a resistant Finn Balor.

Just when the leader of the Balor Club swung back the momentum on his side, the bout ultimately ended in a disqualification when Drew McIntyre interfered and attacked both the superstars.

In a chaotic encounter, the B-Team looked to capitalize by applying a series of small package attempts for the pinfall as the rest of the superstars all laid outside the ring when the Lucha House Party took out AOP and Curtis Axel.

Down to a singles matchup, Scott Dawson tagged in a fresh Dash Wilder and The Revival successfully connected the Shatter Machine for the three count to become the No.1 Contenders to face Bobby Roode and Chad Gable for the RAW Tag Team Championships.

New Intercontinental Champion Dean Ambrose made his way down the ring escorted by his SWAT Team. The Lunatic Fringe bragged about his win against Seth Rollins at TLC and stated himself as the ‘Moral Compass‘ of the WWE.

Ambrose lastly issued an open challenge to the RAW locker room which was eventually answered by Tyler Breeze.

Following an impressive showing in NXT last week against Ricochet, Tyler Breeze carried on his fine streak and took Dean Ambrose to the limits. The Intercontinental Champ evaded all manoeuvres and pinning combinations from Prince Pretty to finally strike the Dirty Deeds and retain his title.

Elias gets his revenge on Bobby Lashley

Bobby Lashley and Lio Rush were basking in all the glory following TLC. The Man of the Hour labelled Lashley’s incredible display of physique as the ‘Greatest Hits‘ until the duo’s celebration was cut short when Elias appeared out of nowhere and smashed a guitar across Lashley’s back.

Ronda Rousey’s open challenge for the RAW Women’s Championship was converted into an eight Woman Gauntlet match by Stephanie McMahon.

Bayley was on a roll after entering first as she eliminated Alicia Fox and Dana Brooke. Fatigue looked to have taken a toll on Bayley in the latter stages as a DDT from Mickie James knocked her out.

Ember Moon entered next and made short work of James as she struck the Eclipse for the pinfall. It was Natalya’s turn and in a back and forth affair, the Queen of Harts secured the three count by wrapping up Moon in the O’Connor Roll.

Ruby Riott also didn’t last long as she missed the reverse sentan allowing Natalya to take advantage and roll her up for the three count.

Sasha Banks was the last entrant and started strong right off the gates. Nattie once again bounced back and speared The Boss into the turnbuckles, providing her with the opening to eventually lock the Sharpshooter in the middle of the ring as Banks was forced to tap out and Natalya earned the right to face Ronda Rousey for the RAW Women’s Championship next week on RAW.

The biggest doping scandals in the history of the Olympics