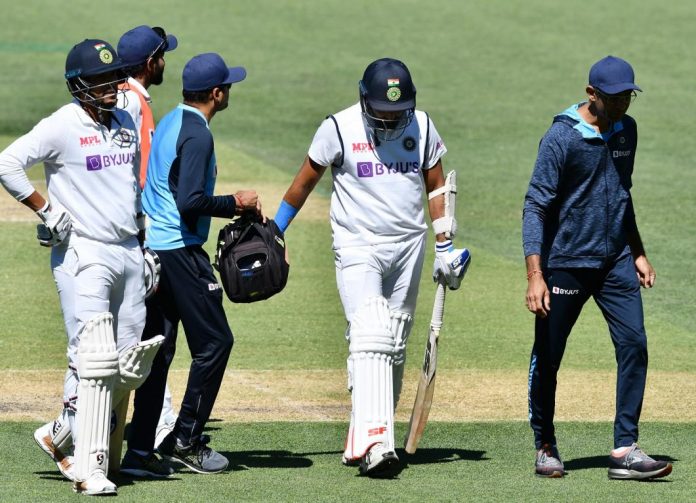 India pacer Mohammed Shami’s Border-Gavaskar series participation has been cut short following a wrist fracture. Shami was hit on the arm with a Pat Cummins delivery which forced him to go off retired hurt and leave India’s innings at 36-9.

Skipper Virat Kohli had provided an update on the pacer and the initial assessment did not look good as he was unable to lift his arm following the hit. While physiotherapist Nitin Patel appeared immediately on the scene and applied some spray, Shami was still in immense pain and could not continue playing.

“He was in a lot of pain, couldn’t even lift his arm. We’ll probably know in the evening what happens,” Kohli said after the crushing 8-wicket loss on Day 3 in Adelaide

As a result, Shami did not bowl in the second innings with the bowling duties taken up by Jasprit Bumrah, Umesh Yadav and Ravichandran Ashwin.

The worst possible outcome dawned upon the Indian team as the scans revealed a fracture which effectively rules the bowler entirely out of the series, which hangs at 1-0 with three games to go.

“Mohammed Shami has a fracture and the chances of him taking part in the remaining three Test matches is next to nil,” a BCCI source told PTI on conditions of anonymity.

The source added that Mohammad Siraj is in line for his test debut following the departure of Shami. Siraj had participated in the warm-up games and is one of the two options India have on the bench along with Navdeep Saini. Veteran pacer Ishant Sharma was already ruled out of the series as a result of an injury sustained during the IPL.

India legend Sunil Gavaskar has requested the Indian management to recall Ishant Sharma back into the squad for the remainder of the series.

Didn’t expect it: Tim Paine opens up on the crumbling of India’s batting order