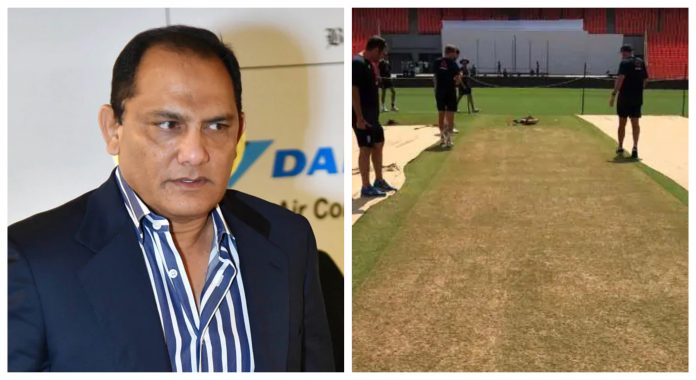 While Team India registered a convincing win over England in the third Test in Ahmedabad, the Motera pitch has become a matter of debate. And, people got divided on the analysis of the pitch as well. In the meantime, former India captain and one of the best players of spin, Mohammad Azharuddin said that wearing shoes with rubber soles helped the footwork and proper shot-selection helps in the success for batsmen on a turning pitch like Motera.

Mohammad Azharuddin has revealed some of his observations in a series of tweets after India beat England within two days in the third Test which was a day-night affair as well. He also suggested that wearing shoes with rubber soles is a better option than the ones having spikes as well.

“It makes little sense to wear spikes when batting. Rubber soles don’t hamper ability of batsmen. I have seen some amazing Test knocks being played on tough surfaces by batsmen who wore shoes with rubber soles,” Azharuddin tweeted.

“The argument that batsmen can slip when running between wickets is countered by the fact that in Wimbledon, all tennis players wear shoes with rubber soles. And the ones that come to mind are not just Indians like Sunil Gavaskar Mohinder Amarnath and Dilip Vengsarkar but also many a visiting batsman like Sir Vivian Richards, Mike Gatting Allan Border, Clive Lloyd and several others,” he again shared.

Meanwhile, Azharuddin, who had played 99 Tests and 334 ODIs between 1985 and 2000, was not happy with the way batsmen performed as well. It is also noteworthy that, only two batsmen from both sides could score a half-century and spinners claimed as many as 28 wickets on a Motera pitch that many players felt was not ideal for Test cricket. Meanwhile, the great player like Sunil Gavaskar has given the credit to the spinners rather than finding faults in the pitch.