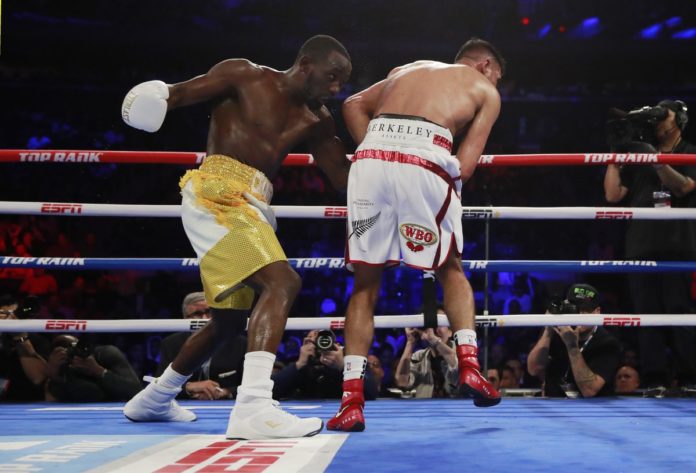 WBO welterweight champion Terence ‘BUD’ Crawford successfully defended his world title for the second time as he defeated former two-division world champion from the United Kingdom via TKO in the sixth round at the world famous Madison Square Garden. 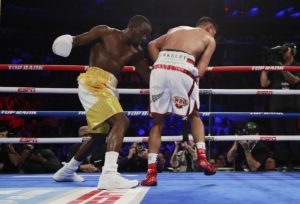 Khan was dropped in the first by Crawford with a counter right but was saved by the bell. Crawford continued to work the body until he landed an accidental low blow in the sixth round which ended the fight.

Here is how the MMA and Boxing world reacted to Crawford’s victory:

That was weak. Low blow yes. But Khan found a way out and took it. He didn’t want to continue with that Crawford onslaught. Don’t blame him. #CrawfordKhan

#CrawdfordKhan going as expected. His power is still real strong up a weight. Bud is too good everywhere. Spence is the only guy that can actually box with him and match his speed. Bud is just on a level by himself. Spence will lose to Bud also.

What!?! That didn’t look like a stopping shot. I think he took the safe way out

Bud is a dawg! @terencecrawford

Amir Khan is a pussy

Three U.S. PPVs so far in 2019 (Pacquiao-Broner, Spence-Garcia and Crawford-Khan) and not a competitive fight in the bunch. Boxing needs to do better.

How about “Khan has chosen not to continue”. https://t.co/9XyFXdCH1D

Trainer Virgil Hunter just told a Nat’l Audience he ASKED @amirkingkhan if he wanted to continue and Khan said “No.” its official. I AM DONE with @amirkingkhan. Don’t even want to see him fight anymore. He wanted Hunter to rescue him from an imminent Knockout. I’m totally Done!

Video of Khan collecting his $5 mil check after he quit with a leg injury #CrawfordKhan pic.twitter.com/k85e7W2sKG

Khan was thinking "I've got money to make against Kell Brook overseas. If Bud Crawford kills me, I can't make any money." Sounds like a business decision.

I didn’t watch any of the fights tonight but seen khan got stopped by a low low??

Man, give me a damn break. I’m sorry, but that did not look like @amirkingkhan got hit in the private’s. And HE didn’t quit, his trainer did. This is some straight B.S. Feel bad for @terencecrawford. His time was WASTED. Goodbye Khan. What a damn shame!

Ok its a low blow take up to your 5 minutes and continue the damn fight! What a way to quit Khan 💆🏾‍♀️CONGRATS @terencecrawford

In my view, Khan hastened the inevitable, he knew he wasn't winning this and perhaps saved himself a beating. This fight was only going one way… #boxing #CrawfordKhan

Say what you want about Khan but he always makes for an exciting fight! I'm enjoying this #CrawfordKhan

Khan chooses not to continue regardless of the low blow. It's a TKO for Crawford.

"You didn't quit? Tell the truth."

Terence Crawford and Amir Khan have a friendly chat about the end of #CrawfordKhan 😅 (via @trboxing)pic.twitter.com/TEQC5Nd5VA

"He was hit in the testicles!"

Virgil Hunter explains his decision to pull Amir Khan out of the fight with Terence Crawford 👇 #CrawfordKhan pic.twitter.com/nWRoCrAFqb

Joe Tessitore was saying something like “Crawford dropped Khan in the first and it took Canelo 6 to stop him”.

Amir Khan has been knocked out before, but this is the first time that he's truly been beaten up. This is just one man, a much better fighter, punishing another for no real reason other than he wants to. Crawford could knock Khan out any time he wants. #CrawfordKhan

Khan is meant to have 5 minutes to recover. I can't understand why they didn't give him 5 minutes and then make a decision. I presume Virgil Hunter just wanted to save him from a more unpleasant fate #boxing #CrawfordKhan

Khan’s explanation makes very little sense. He talked about the low blow but didn’t protest his corner stoppage and didn’t take the full five. Looks like the coach was maybe fishing for a DQ.

Bud is breaking Khan down, systematically at this point.@trboxing #CrawfordKhan

This is a Freaking Fun Fight! Bud all day! Gotta give #Khan credit for staying in this and taking those hard shots! #CrawfordKahn @trboxing @espn @ESPNDeportes #boxing

What is Amir Khan ? pic.twitter.com/xlqgvuIWH2

Amir khan was getting the shit beat out of him soon as he got a chance to quit he quit like a lil bitch #CrawfordKhan pic.twitter.com/8c6iw3Fiq2

Dude got punched in the hip and it’s over!? That was some good money wasted. Khan was tired of getting punched on!

Hate to say it but Khan has chucked that for me

TKO by uppercut to the dick hole…only you Amir Khan 😑

Khan is either injured or looked for a way out. If it's the latter that's a shame.

Crawford is different class though. Let's see this Spence fight.

Khan took a pretty nasty low blow. But I've seen fighters take worse — and he still had a few minutes to recover. Could have been looking for a way out.

Khan was obviously losing the fight but don't get how a low blow can be a TKO.

All u gotta do is time Khan coming in & land one clean bang & man’s bum goes! That’s easy work for Brook! Real ones know! U can teach a man how to box but the FIGHT comes for inside! #CrawdfordKhan

Amir Khan says he has never been hit below the belt before…🤔 pic.twitter.com/rmqgzbWOdb

Khan quit, could of took the full 5 mins but was getting beat fair and square. Fkn pussy

Cock Knocker Crawford finishes Khan with an absolutely savage dick punch TKO. Just like I used to do in Fight Night Round 3. #CrawfordKhan

Khan actually had a good fifth round. Disappointing conclusion.

Oh well. Bud was winning, Khan says no more. On to the next. #boxing #CrawfordKhan