The 13th edition of Indian Premier League (IPL) has been playing in the UAE and like every season it has set a new bar. Although the fans are not allowed on the ground due to COVID-19, the viewership has raised a lot. And, with stunning performances, Mumbai Indians have done well and topped the chart too. Meanwhile, their key all-rounder Hardik Pandya has come in the limelight for an entirely different reason.

While they are one of the teams that are confirmed for the playoffs, Pandya can be seen promoting a perfume brand while staying inside a pool. It was a paid partnership with VILLAIN and he posted a picture with the caption, “With @villainlife.official, be ready to always hit long and hard. Get yours: www.villain.in #HeroNahiVillain”.

However, it was his Mumbai Indians teammate Mitchell McClenaghan who commented in a funny way and took the limelight away. He commented, “Straight of a magazine” and then asked, “Do you think I could pull this off?” 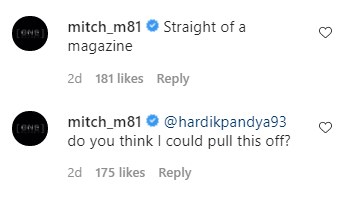 However, Hardik Pandya has come in the limelight recently with his gesture during the game against Rajasthan Royals (RR). Pandya stole the show by becoming the first player in cash-rich league’s history to take a knee which showed his support towards the ‘Black Lives Matter’ movement.

Moreover, the all-rounder took to social media and shared a photo of his gesture. He posted it with the caption, “#BlackLivesMatter”.

Notably, the fight against racism and the ‘Black Lives Matter’ movement has started a few months ago and it got a lot of support after the death of African-American man George Floyd in May this year. Since then, the movement got support from several areas including many sports stars who have shown their support for the movement in their international series.

And now, Hardik Pandya joined the league during the IPL 2020 game in Abu Dhabi at the Sheikh Zayed Stadium.

However, recently, West Indies captain Jason Holder has expressed his disappointment as no team in the ongoing Indian Premier League (IPL) has taken a knee in solidarity yet. “To be honest, I haven’t had one conversation up here around it (BLM). Sometimes it seems it has gone unnoticed, which is a sad thing,” Holder was quote as saying on Cricket West Indies website.