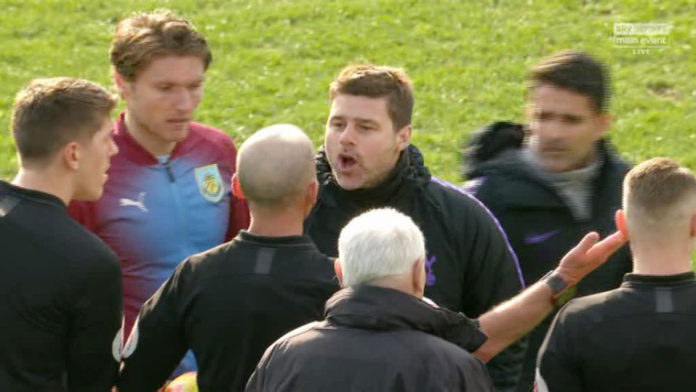 Saturday saw one of the biggest shocks of the season as Burnley downed Tottenham Hotspurs at Turf Moor by 2 goals to 1 after an impressive performance by the Clarets. Things took a but of an ugly turn after the final whistle however as match referee Mike Dean was seen in a heated argument with Spurs manager Mauricio Pochettino, which led to the official’s removal for Spurs’ game against Chelsea in the Premier League. 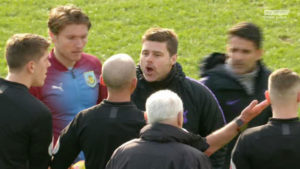 The Argentine was understandably upset after his team’s frustrating loss to Burnley, potentially knocking them out of the Premier League title race for good. It is still unclear what the argument was about as both parties have refused to speak on the matter to the press. The FA will however look into the matter and take appropriate action against both parties.

Pochettino hasn’t been charged with misconduct for 6 years but it seems that his assistant, Jesus Perez might be in more trouble as he was seen angrily pointing his finger towards Dean’s face. Such an act is clearly an act of misconduct as per the FA and the verdict may not be a favourable one for the coach.

Mike Dean’s removal as fourth official from Spurs’ trip to Stamford Bridge might just be a precautionary measure to prevent things from boiling over between the official and the manager, He will however be on the touchline at the Etihad for Manchester City’s clash against Wes Ham.

Watch: Kepa refuses to be subbed off as Sarri is left fuming