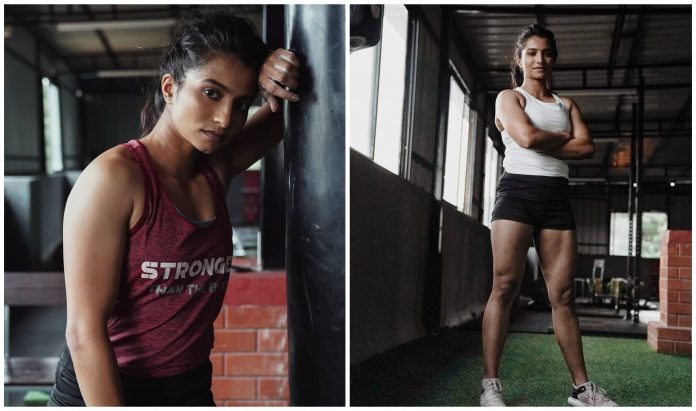 Once, an introverted 17-year-old girl from Kottayam in Kerala decided to pick up the sport of mixed martial arts with a goal- to protect herself and her sisters. Now after almost a decade, she has become one of the latest big names out of the Indian combat sports fraternity.

Say hello to Sanjana George, Indian kickboxing and MMA star who has also been recruited by WWE, and will kickstart her career in professional wrestling from stratch under the promotion that is the best in the business.

Sanjana George wants to make everyone proud at the international stage

Ever since she was a child, Sanjana was a big fan of WWE icons The Rock and Ronda Rousey, the latter who is one of the most prominent MMA fighters of all time, and was inspired by their success in the squared circle.

When she was 17, Sanjana decided to learn MMA for her own self defense, as well as a mean to safeguard her siblngs. Although her parents showed reluctancy at first, Sajana gradually gained the support from her family as she was also gaining confidence and respect from her training.

Back in 2019, when WWE had their first tryout in India, and Sanjana was one of the four that made the cut out of 3000 applicants in a four day event in Mumbai. However, due to the onset of the COVID-19 pandemic last year and initial visa rejection, her flight to the United States was getting delayed.

Last month, Sanjana inked a deal with WWE, the second female superstar out of Indian to join the company after Kavita Devim, and has been training at the WWE performance center in Orlando before she makes her NXT debut.

Interesingly, even before she appears in NXT, Sanjana has already had a personal interaction with none other than NXT boss and former WWE heavyweight champion Triple H, when she said that it was “an absolute privilege to meet” The Game, who in turn wished his new recruit good luck.

With a huge hope in her heart to make it big as a wrestler, Sanjana also wants to make her country proud in a platform which has rarely seen Indian superstars. “I want to share with the world how vast and beautiful India really is,” Sanjana told Times of India after signing her WWE contract, “as I have been outside of Kerala for college and work a lot, I haven’t been able to represent the State much, in sports. But I’m hoping to do well and make everyone proud.”