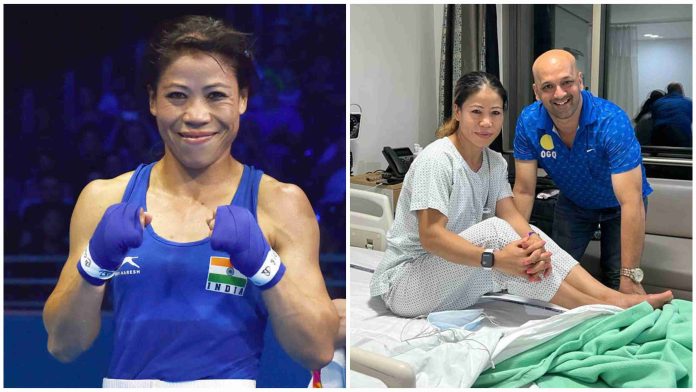 The six time world champion and 2012 London flyweight bronze medallist sustained the injury during her 48 kg bout during the Elite Women CWG Trials on 10th June in New Delhi, causing her to pull out of the 2022 CWG which took place in Birmingham earlier this month.

As revealed by Mary’s coach Chhote Lal Yadav to PTI, the 39-year-old underwent the surgery at a hospital in Mumbai.

“Mary had an ACL injury in her knee for which she underwent surgery today in Mumbai,” said Yadav.

Following the surgery, the veteran boxer took to Twitter herself to thank Olympic Gold Quest.

“I will be fine very soon. Thank you @OGQ_India for the contant love and support,” tweeted Mary.

I will be fine very soon. Thank you @OGQ_India for the contant love and support. pic.twitter.com/Ng40shXRRb

At the 2018 edition of the CWG, Mary became the first female pugilist from the country to secure a gold at the event. She was last seen in action at the Tokyo Olympic Games last year, where she bowed out in the quarterfinals.

Earlier this year, Mary also decided not to participate in the 2022 IBA Women’s World Boxing Championships, which took place in Istanbul, Turkey from 8th to 20th May, to focus on Birmingham.