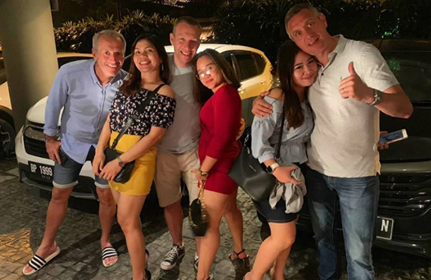 One would expect the young gun footballers in the Premier League to be having wild fun in the sun and sand during the vacations, especially with the ladies but story has emerged from Indonesia where Premier League referees out of all people are having a hanky-panky vacation time.

Andre Mariner, Martin Atkinson, Kevin Friend and few other referees were down in Indonesia for a charity fundraiser. However, the lot were raising whisky glasses alongside some young local ladies. The esteemed refs are all aged 40+ mind you and everyone except one are married.

David Coote, 36 — the only unmarried man in the six-strong party — held a woman as they gyrated in a nightclub.

And Kevin Friend, 47, was seen whispering into a woman’s ear.

Atkinson, of West Yorks, Friend, of Leicestershire, and Marriner, of Birmingham, posed again with their arms around three of the women outside a four-star hotel.

One witness told : “It all looked very sleazy. The girls were very young and the guys were old enough to be their fathers.

“The way they were drinking and dancing you’d think they were randy young footballers — not the referees!”