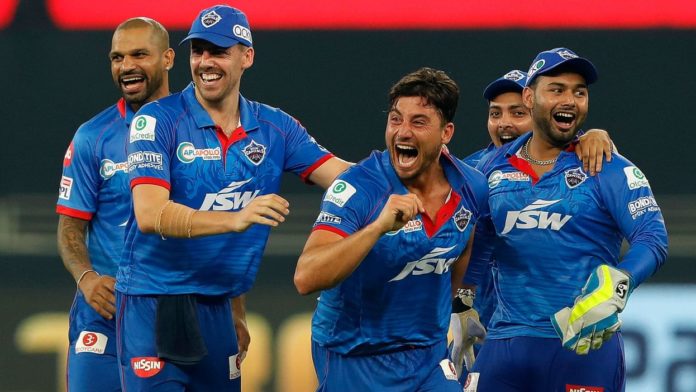 Australian all-rounder Marcus Stoinis finally came of age as he almost single-handedly helped Delhi Capitals register a dramatic win over Kings XI Punjab in the Indian Premier League (IPL) on Sunday. Stoinis’ last over star turns with both bat and ball turned the tables in Delhi’s favour in a topsy-turvy contest that lit up the Dubai sky.

Stoinis, 31, was always touted with great expectations, but more often than not-the tag weighs you down.

But sometimes, it only takes a few things falling in place.

For almost 17 overs, the KL Rahul-led Kings XI Punjab had a lid on the scoring rate only for the pace bowlers to go horribly wrong in the death overs.

Stoinis went from being a villain overnight in the IPL to becoming a hero for the Delhi Capitals, with his all-round performance, scoring 53 off 21 deliveries before picking up two wickets in the final over to seal the game for Delhi.

Stoinis struck 3 sixes and 7 boundaries as hit the 4th fastest fifty by a Delhi Capitals player in his maiden match for the Shreyas Iyer-led franchise in IPL 2020. In the final over against Chris Jordan, the Australian big-hitter helped the Capitals collect 30 runs – the joint-most expensive last over in the history of the IPL. He clubbed three fours and two sixes before he was run out off the penultimate ball while going for the second run.

Stoinis then forced the game into the super over by dismissing opener Mayank Agarwal and Jordan off the last two balls of Delhi’s innings with the scores level.

Talking about the knock, in an exclusive quote, the 31-year-old said, “I think the partnership that Shreyas Iyer had with Rishabh Pant was important, we were in a tough spot there. We were sort of looking for 130-140 after the early wickets. Yeah, it was handy [the final over], that can happen in cricket. A lot of bowlers are going wider to me these days, so I’ve got to work on that stuff. It was part of the game plan to walk across the stumps,”

While Mayank’s 60-ball 89 was the main attraction on Sunday, it was overshadowed by Stoinis’s all-round performance on the night. So much so that an umpiring error that might have cost Kings XI Punjab the contest-failed to steal Stoinis’ thunder.

Maybe, just maybe this is one of those fairytales of cricket. It just could be the year that defines the Australian all-rounder.

Ahead of IPL 2020 auction, Stoinis was released by Royal Challengers Bangalore despite the all-rounder coming up with decent numbers for the Virat Kohli-led franchise last year. Stoinis had struck at 156 and collected 211 runs in 10 matches for RCB in IPL 2019 but he was deemed surplus by their management who went for a management overhaul.

Cut to 2020, Stonis, playing under head coach Ricky Ponting, was at his lethal best, as he hit Kings XI Punjab bowlers out of the Dubai International Cricket Stadium, at will. Stoinis finished with 53 from just 21 balls as he rescued Delhi Capitals from 96 for 6 to 157 for 8 in 20 overs.

Stoinis has lately found more cheer batting further up the order, and the rest of that England tour brought him useful top-order runs but not enough to suggest he’d made any sort of breakthrough. Then he arrived at the IPL, where the Delhi Capitals only really had room for him in their lower middle order. It wasn’t like he could dictate where he would bat; this was his third franchise in his fifth season.

T20 cricket is Taylormade for someone like Stoinis. After all, he belongs to that rare breed of cricketers who can bat anywhere in the batting order, bowl useful overs, both at the start and the end of a T20 innings and is a gun fielder. In an ideal world, more than the win, Stoinis’ effort augurs well for Delhi Capitals in the context of the season. As a classic case, it was just his night to shine in Dubai. In cricket, sometimes the intangibles simply take over.

Long touted as a finisher in the Australian batting line-up, Stoinis had not quite delivered consistently. Maybe, the IPL opener would open up the infinity for Stoinis.

How important is Kane Williamson to Sunrisers Hyderabad