Diego Maradona’s former fitness coach Fernando Signorini has stated that he would be happy if Lionel Messi had chosen to play for Spain instead of Argentina. According to him, the Argentine superstar has to take a lot of pressure while playing for the National side. 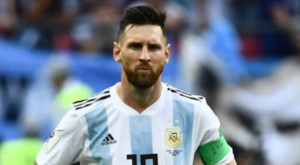 “I wish he had taken Spanish nationality and he would already be a world champion,”

“But they’d say that he was selling out his homeland for not wanting to play with the national team.

“Messi has given up a lot of privileges.


“He doesn’t have to return to the Argentina team, nor does he have to go back to Newell’s Old Boys.

“Sadly for all those who admire him, he cannot keep paying the high price of ruthless criticism, as they say he is cold, that he doesn’t sing the anthem and that he doesn’t feel the shirt.

Lionel Messi has also been compared with the legendary footballer Diego Maradona who has lifted the World Cup for Argentina. But Lionel Messi has missed the Golden chance to win the World Cup in 2014 as they were beaten by Germany with a solitary goal of Mario Gotze in the extra time. In this year’s World Cup, Argentina were knocked out by France in the quarter final stage of the tournament.

This Argentina National side are too much dependent on Lionel Messi and that’s why the Barcelona superstar has to take huge amount of pressure. According to Fernando Signorini, Lionel Messi would have lifted the World Cup if he had chosen to play for Spain. The former fitness coach of Diego Maradona has also stated that the drug addiction has badly affected the health condition of the legendary footballer of Argentina.