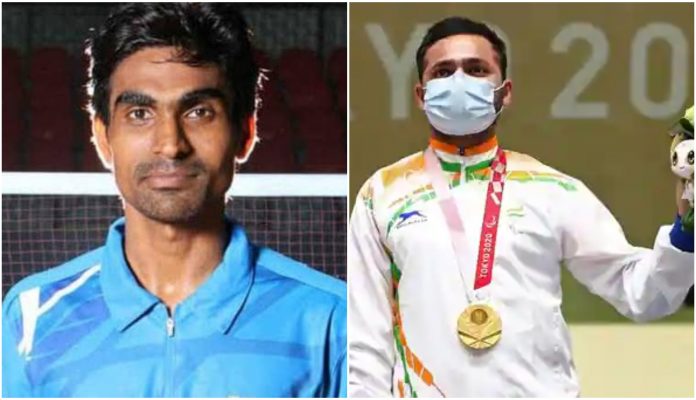 It’s another big day for India at the Tokyo Paralympics. Manish Narwal and Pramod Bhagat have both won gold at their respective games, shooting and badminton.

India’s medal cound at the Paralympics have risen to 17 this year!

Manish shot at a total of 281.2 in a P4 mixed 50m pistol SH1 event while Singhraj Adana finished silver. Pramod on the other hand defeated Great Britain’s ace Daniel Bethell in the men’s singles SL3 final event and Manoj Sarkar took the bronze home after beating Daisuke Fujihara of Japan.

Manish was born in a small village Bhallabgharh, Haryana. He dreamt to become a football player but the universe had planned something different for him. Due to certain congenital issue in his right hand, Manish dreams of becoming a footballer remained a dream.

His father Dilbagh took him to the nearest shooting academy run by Rakesh Thakur and that was it. Manish was instantly fascinated and enrolled in the academy. Coach Jai Prakash Nautiyal was the first person to notice the potential in Manish.

Pramod has previously won at the para Asian Games. The top seed was a medal contender for India and he did not disappoint.

He was in the lead from the very beginning 21-14, 21-17. He did not allow any opening for Daniel to score some points. The whole match lasted for about 45 minutes.

Daniel tried to break his spirits, but Pramod kept a level head.

This is very special to me, it’s my dream come true. Bethell really pushed me but I just kept my calm and played to my strengths.

The 33-year-old Odisha star, had developed an interest in the sport after watching his neighbours play the game. Pramod has been suffering from polio since he was four years old.

He is going to play for bronze with his partner Palak Kohli in the mixed doubles.

I would like to dedicate this to my parents and to eveyone who has supported me throughout. I’m glad I could make India proud.

The Indian pair is to face off Daisuke Fujihata and Akiko Sugino at the final day of the Paralympics.