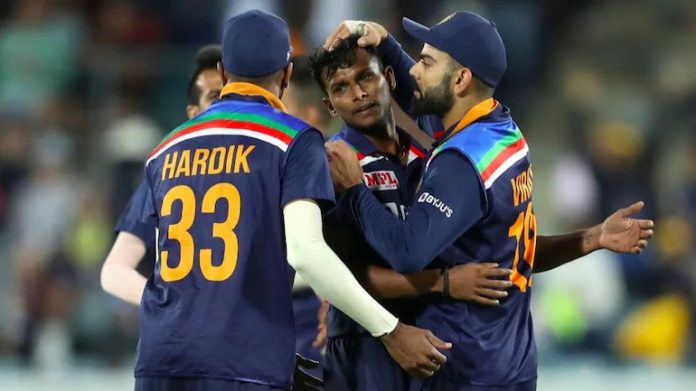 After India beat Australia in the second T20 at Sydney to clinch the series, Hardik Pandya was lauded as a national hero-but one player who went about his job rather nonchalantly was T Natarajan, who bowled an excellent spell to put breaks to the Australian juggernaut.

Playing in the Indian Premier League (IPL) for Sunrisers Hyderabad, the left-arm bowler showed he has the potential to be there and win games for Team India. He is someone who is very confident and is not afraid of getting hit. That’s something very special.

Natarajan garnered the attention of the selectors with his ability of bowling Yorkers and accuracy in death overs. After a terrific IPL 2020 season, he bowled against the Aussies and troubled the likes of Steve Smith in the ongoing T20I series.

The interesting fact is, ever since the 29-year old made his international debut, the Indian cricket team has been undefeated. The left-arm pacer provided the much-needed strength to the Indian bowling attack which went on to outplay the Aussies in their own backyard, in the shortest format of the game.

In a T20I clash where every fast bowler from either side went at nearly 10 runs an over, Natarajan stood out starkly with figures of 2-20 from his four overs. While Hardik Pandya took all the limelight from India’s series-clinching win in Sydney, Natarajan’s display was equally worthy of the Man-of-the-match award.

The lanky bowler hails from the Salem district in Tamil Nadu and happens to play for the State team. He made his First-Class debut in January 2015, followed by his Twenty20 (T20) debut a couple of years later, while he made his List-A debut in September 2018.

He is ideally a medium-pace bowler, who has a weapon in the form of some off-cutters. His ability to bowl yorkers is additional ammunition to his arsenal.

His journey from becoming a tennis ball legend in Chinnappampatti to acquiring a reputation as a yorker master in the Tamil Nadu Premier League (TNPL) is awe-inspiring. From taking the wickets of MS Dhoni and also AB de Villiers with a yorker in the IPL, it was only a matter of time before Nattu-as he is fondly called- would get into the India cricket team.

Natarajan was initially picked to accompany the team only as a net bowler, was drafted in the T20I squad on November 9 as a replacement to the injured Varun Chakravarthy, and then as cover for Navdeep Saini in the ODI squad just a day before the series began on November 27.

Its been a whirlwind-like week for the Tamil Nadu bowler, who was handed his debut cap by Virat Kohli ahead of India’s match against Australia at the Manuka Oval in Canberra last Wednesday.

Just like his journey from Salem all the way to Australia, the southpaw’s journey has been nothing short of remarkable.

Even Australia legend Glenn McGrath, considered to be one of the best bowlers ever to have played the sport, praised the youngster from Tamil Nadu and said that he definitely had to be the find of the tour for India.

Sky the limit for Natarajan

It is still early-days in International cricket for Natarajan, but the initial impressions will be highly encouraging for Virat Kohli and Indian team management. Unlike India’s premier left-arm speedsters such as Zaheer Khan, Ashish Nehra and Irfan Pathan, the southpaw does not possess the ability to generate lateral movement with the new ball.

However, he more than compensates for that shortcoming with his accuracy at the death along with some clever change-ups in pace and precise yorkers.

It is thus, a little surprise that just like Jasprit Bumrah, Natarajan has quickly become Virat Kohli’s go-to option. One of the highlights of Natarajan’s bowling is his miserly economy and an impressive average throughout the IPL.

India is historically known as a factory of batters. Many good bowlers have come before him, only to fade out sooner rather than later. Only hard work will enable Natarajan to sustain this initial euphoria and go on to forge a long career.

Time is still ripe for Natarajan in international cricket, but his calmness and left-arm variety give India’s attack a new dimension as they plan for next year’s T20 World Cup to be played on home soil.

The final T20I in Sydney and the upcoming series against England next year will be Natarajan’s chances to make that spot his own.