The qualifying match in the Aldar Properties Abu Dhabi T10 between the Maratha Arabians and Team Qalandars ended in a tense finale, as fans were gripped by a thrilling run chase that went down to the wire. Chris Lynn’s fifth half century of the tournament gave his team a competitive total to defend. A brave performance by the Qalandars ultimately accounted for little as they fell seven runs short of a victory. 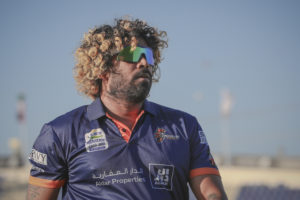 Under the glorious Abu Dhabi sun, Chris Lynn and Hazratullah Zazai strode out to the crease as the Maratha Arabians looked to book their team’s place in the final. Dawid Malan’s Qalandars found some early impetus, as Mujeeb Ur Rahman found the wicket of Afghan compatriot on the match’s fourth ball for 1. However, Lynn and Adam Lyth built a strong partnership, pushing their team past fifty as the match entered the fourth over. 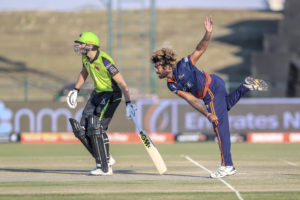 The blossoming partnership was soon ended as George Garton, the leading wicket taker of the tournament, took his twelfth scalp as Lyth could only watch his attempted heave nestle into the hands of Phil Salt, departing for 28. Despite Team Qalandars’ attempt to stifle the free hitting Lynn with some astute bowling, the Australian opener continued to force the bowling attack on the back foot, picking out clever gaps in the field. In a flurry of wickets that fell in the sixth over, Najibullah Zadran departed for 2 and Yuvraj Singh edged high in the air down to third man. 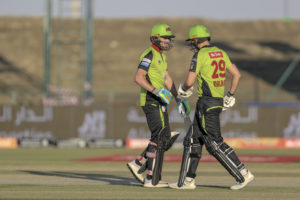 Lynn’s impressive form continued as he smashed two consecutive well-timed sixes off Lahiru Kumara to bring up his half-century and the team’s century. England’s Jordan Clark kept a calm composure in the final over, playing a delivery that forced Lynn to hit straight to the hands of Kohler-Cadmore. Shanka’s wicket was the final one to fall as Maratha Arabians closed their innings, setting the Qalandars a target of 120, built upon Lynn’s magnificent 67 runs of 30 balls. 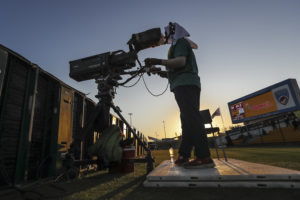 New Zealand’s Luke Ronchi began the run chase in blistering fashion, smoothly gliding three deliveries to the boundary in the first over. Captain Dwayne Bravo looked  to combat the opener with his own bowling, and the decision immediately paid dividends, edging a slower ball onto Ronchi’s stumps, departing for 17. Captain Dawid Malan continued to play expansive cricket alongside Phil Salt, whose short but impactful innings saw him make 26 runs of 10 balls.

Just as the Qalanders reached 50 runs, the Maratha Arabians began to climb into the ascendancy as Dawid Malan found himself to be the latest casualty of Mitch McClenaghan, leaving his team three down and needing 61 runs from 27 deliveries. Lasith Malinga, McClenaghan and Dwayne Bravo channeled all their experience into increasing pressure on the Qalandars’ batsmen, as the runs dried up and the run rate crept up to 24.00.

After Tom Kohler-Cadmore was run out scrambling for a second run in the final ball of the ninth over, the Qalandars hopes rested on England’s Laurie Evans and the UAE’s Amjad Khan, who required 28 from the last over. The tension was palpable in the crowd, as Evans flicked a humongous six and played a lovely drive for four, reducing the required run rate to 18 from three balls.  The challenge ultimately proved too much for the defiant Englishman, who could only find one six from the three required, as the Maratha Arabians became the first team to cement their place in the final.

Bravo spoke on his team’s jubilation at reaching the final saying: “We are extremely happy at reaching the final, because as a team right from the beginning we have developed a strategy that we have had to focus on and we have done that very successfully. It’s a great experience for the UAE players as well to get exposure to pressure situations. They will benefit from all the knowledge that is being shared with them in the T10 from world class experienced players”.

Malan commented on the fine margins of his team’s defeat saying: “Today, the difference was that we were unable to capitalize on one delivery when we were batting and one delivery when we were bowling. But that’s the nature of T10 where we have seen how every ball is crucial. Ahead of another game later on today we just need to focus on our plans and go out there and execute it to make sure we are in the final come tomorrow.”

Bangla Tigers face off against the Deccan Gladiators is the second qualifier of the day at 17:45, with the winner due to clash with Team Qalandars for a place in Sunday’s final.

Matches have 10-over-a-side format and duration of 45 minutes a side, totalling 90 minutes of play. The tournament is played over ten days, with a round robin followed by semi-finals and the final. In August 2018, the International Cricket Council (ICC) officially sanctioned the league.

ADC was founded on 20th November 1996, with the impressive Zayed Cricket Stadium, considered among the world’s best, being completed in 2005. The Stadium’s inaugural international match was staged between India and Pakistan in April 2006 and was attended by 20,000 enthusiastic fans.

Zayed Cricket Stadium has hosted numerous domestic and international matches since that day. The electric atmosphere of the Pakistan vs. India match was rivalled when the Indian Premier League arrived in 2014.

2018 saw the stadium’s biggest season to date with over 75,000 fans flooding the stands throughout the 2018 ACC Asia Cup, Pakistan vs. Australia series, Pakistan vs. New Zealand series and of course the inaugural Abu Dhabi T20 – during which six of the world’s biggest T20 franchises descended upon the UAE capital to vie for championship honours.

Though cricket is at the core of operations, ADC also prides itself on the world-class facilities available, catering to sportsmen and women of all ages and abilities from elite international players to community sports enthusiasts.

In addition to the international cricket season that was, ADC has also welcomed and hosted the likes of the England and Wales Cricket Board’s (ECB) England Lions for their 2018 tour of the UAE, New Zealand’s All Black 7s and Black Fern 7s rugby teams ahead of the Emirates Airline Dubai Rugby 7s (of which both teams emerged champions) and Japan, Oman, Syria, China, Yemen, Iran, Thailand, India and South Korea’s football training camps ahead of the 2019 AFC Asian Cup.

The facility has also been used by several other international associations as a winter training destination, most notably many professional English County teams who return year after year for their pre-season camps.

The recent investments to develop the facility have truly ensured that ADC is known for more than cricket. Indeed, Abu Dhabi Cricket has become the home for a range of coaching academies, clubs, groups and schools for football, touch rugby, netball, basketball, squash and much more.

ADSC is aligned with the emirate’s leadership vision to develop sport and youth activities. The Council promotes an effective, emirate-wide sports calendar that stimulates the desire to participate in quality sports among all Abu Dhabi residents and helps the talented and motivated reach their sporting potential.

We at ADSC firmly believe that sporting events deliver a host of benefits for the emirate and its residents. These span improved health and wellness, the building of community spirit, the discovering of local talent and the delivery of international exposure of the emirate as a world-class sporting events hub.

Whether it is land, sea or air, we have sport covered.