Everyone is in awe of LeBron James, even his fellow NBA players. Dallas rookie Luka Doncic is one of them, and he asked James for his jersey during the game at the Staples Centre. The 19-year-old wanted a signed jersey, and he was not disappointed. 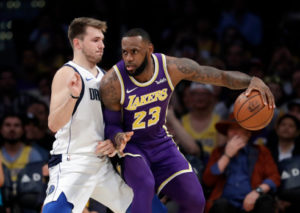 According to Baxter Holmes from ESPN, Doncic waited in the hallway after the game for the jersey. A team official from the Lakers came over and handed him the piece with James’ signature and a message which included the phrase, “Strive For Greatness.”

“I always wanted his jersey,” Doncic said after he received the memorabilia. “It was something special to me.” James has been one of Doncic’s idol, and the Slovenian was looking forward to the matchup.

“It’s very special,” Doncic said about playing against James, “I was waiting for this game, and it was very special to me.” LeBron is familiar with Doncic as well.

luka got a signed lebron jersey after the game pic.twitter.com/ksWncx4paO

“I think European players are developed faster than NBA guys, meaning American players,” James said. “I think he’s been in a pro-development stage now for how many years? Since he’s 15? So I don’t think this is intimidating to him. I don’t think this game is something he hasn’t seen before.”

Doncic is averaging 19.6 points this season, as he looks to repay the trust Dallas showed in him by acquiring him.