In an action-packed match-up at the Staples Center in Los Angeles, Kawhi Leonard led Clippers defeated LeBron James’ Lakers 112-102 in an entertaining match-up in the season-opener.

Kawhi Leonard scored 30 points with 6 rebounds and 5 assists in his very first match under the new organisation. Lou Williams was the second-highest scorer for the Clippers as he dropped 21 points with 5 rebound and 7 assists. He also won last season’s championship while playing for Toronto Raptors. 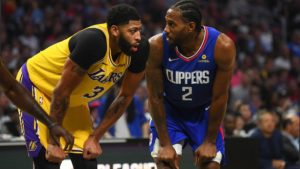 Danny Green impresses the most and he was also the lead scorer for the Lakers as he dropped 28 points with 7 rebounds, 2 steals and 1 block. He dropped seven three-pointers in the game.

On the other hand for the Los Angeles Lakers, Power forward Anthony Davis scored 25 points with 10 rebounds and 5 assists. This was also Davis’s first regular-season game in Lakers jersey. He previously played for the New Orleans Pelicans. LeBron James dropped 18 points with 9 rebounds and 8 assists.

Lakers will play Utah Jazz at home on Friday. Lakers have won 25 games and lost 13 of them playing Jazz at home.

On the other hand, Clippers will travel to the newly built Chase Center in San Francisco where they will play the Golden State Warriors on Thursday.