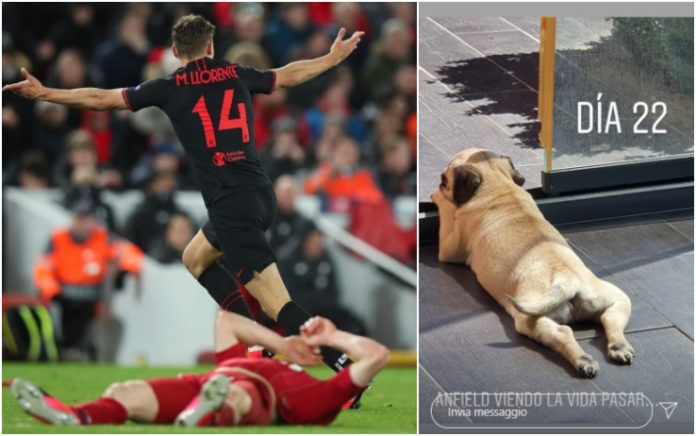 Marcos Llorente has stabbed a dagger into the hearts of the Liverpool faithful by naming his dog “Anfield”. The Spanish midfielder had conquered Liverpool’s fortress by scoring twice in extra time to knock the defending champions out of the UEFA Champions League. 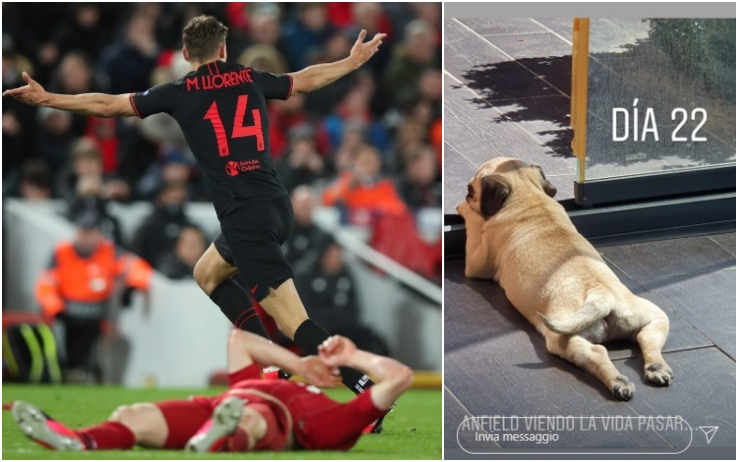 Taking a mighty dig at Jurgen Klopp’s side, Llorente has named his pet dog as Anfield. The fact was revealed through his Instagram story.

Going through the 22nd day of the quarantine, Llorente captured his dog gazing out along with the caption to the video as “Anfield viendo la vida pasar (Anfield watching life go by).”

The dig might stem from the fact that Liverpool had diminished Atletico’s chances way before the second leg. With Andy Robertson and even manager Jurgen Klopp challenging the La Liga side to come to Anfield.

Marcos Llorente scripted his legacy at the famous ground after coming on as a substitute in the second half and scoring two decisive goals which turned out to be Liverpool’s route to the exit door.

Expecting yet another famous European night at the Anfield, Liverpool were touted to go into the quarter-finals despite a 1-0 deficit from Madrid in the first leg. Georgino Wijnaldum’s header past Oblak put the team from Merseyside in pole position for a spot in the final 8 and were expected to kill the contest in the second half.

However, Atletico Madrid’s resilience took the game into extra time. A botched clearance by Adrian was all the catalyst that the visitors needed. The ball was latched up by Llorente who subsequently curled the ball into the bottom corner to silence the mighty Anfield.

Llorente was not done as he scored once again a few minutes later before Alvaro Morata sealed the deal with a deft finish to leave Liverpool reeling in their own backyard.

FIFA World Cup 2018: Battle For The Wooden Spoon As Saudi...