Top of the league and an impeccable defensive record go hand in hand but Liverpool FC are doing the customary in style. Brilliant signings and promising young talents have all contributed to convert a defensively unstable Jurgen Klopp defense into Europe’s best and we have proof. 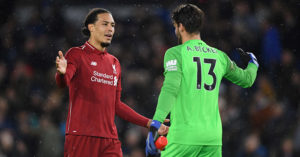 Virgil Van Dijk has been something of a world’s best. The Dutchman arrived on Merseyside in January for a record £75million and after settling in helped the Reds go on an eight-month run where they did not concede a single goal at Anfield in the Premier League.

Joe Gomez has complimented VVD subliminally well at the back and wingbacks Robertson and Alexander-Arnold have been a force to reckon with. After them all, a forcefield by the name Alison Becker stands tall between the posts. What else can one argue against once the figures of 13 clean sheets and 10 goals conceded are presented.

Liverpool have the most clean sheets (13) and have conceded the fewest goals (10) in Europe’s top leagues this season.

Can this defence win the title? It certainly deserves to provided no one ‘slips’ this time around!

Watch: Dutch club fans release a chicken onto the pitch to...