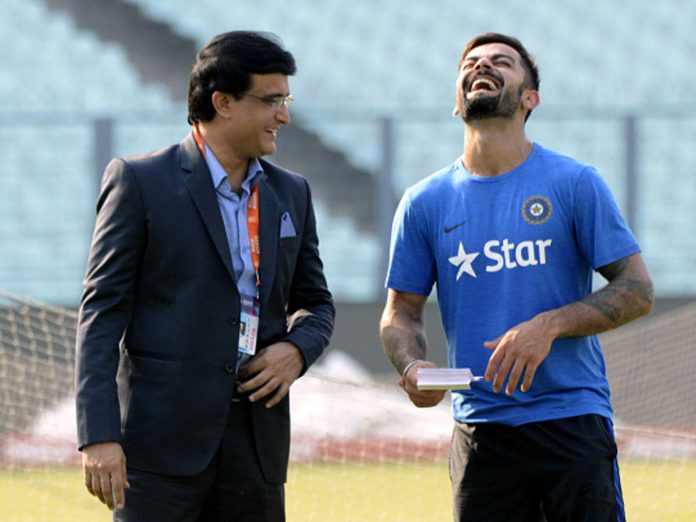 Indian cricket seems to be in a precarious situation after BCCI President Sourav Ganguly and Indian Test captain Virat Kohli’s contrasting statements came into the limelight. Now, the BCCI President has stated that he is is a huge admirer of Virat Kohli’s attitude. However, he expressed unhappiness with Virat’s tendency to pick up fights with everyone. Ganguly made the comments in an event in Gurgaon while answering which player has the best attitude according to him. “I like Virat Kohli’s attitude but he fights a lot,” said the BCCI president.

The contradictory views given by Sourav Ganguly and Virat Kohli have left the fans wondering if everything is fine between the two legends. When Kohli was sacked as ODI captain, Sourav Ganguly said in an interview that he personally requested Virat to not step down from the T20I leadership role.

However, Kohli, while addressing a press conference ahead of India’s tour to South Africa, claimed that he wasn’t asked to continue to lead the side in the shorter format. During his fiery presser, Virat also put an end to the everlasting allegations of having him having a rift with Rohit Sharma. Virat stated that Rohit will have his full support as captain of the white ball format.

Sourav Ganguly refuses to give a statement after Kohli’s presser After Virat Kohli’s explosive press conference, Sourav Ganguly was asked for his comments. However, the former captain refused to give any statement or comments on this issue. The southpaw stated that this is a BCCI related issue and they will act accordingly.

Ganguly was also asked about how to manage stress, to which the former India captain had a very sarcastic answer. “There is no stress in life. Only wife and girlfriend give stress,” he said.

Amidst this controversy, the Indian team has already landed in South Africa and begun their preparations for the Test series against the Proteas. The first test will begin on Boxing day i.e. 26 December. India will look to conquer the only frontier left for them in test matches.

ALSO READ: Andy Flower is in line to be named as Lucknow franchise’s coach