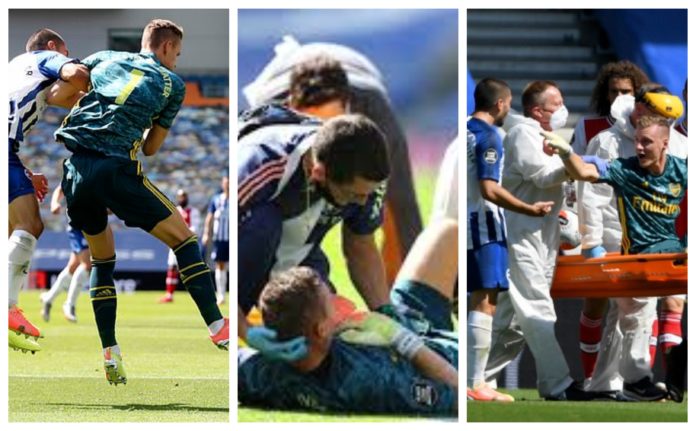 Arsenal’s injury plight continued as goalkeeper Bernd Leno became the latest casualty after suffering a freak injury against Brighton and Hove Albion at The Amex Stadium. 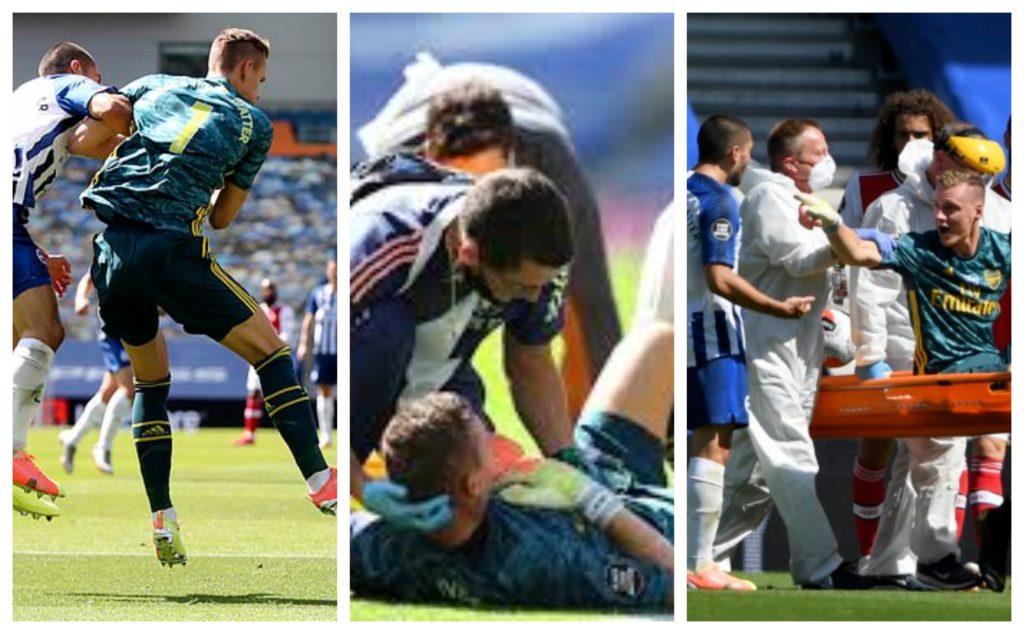 The German International went for the ball languishing on the edge of the box before a collision with Neal Maupay caused him to land awkwardly. The silence in the stadium caused Leno’s heart-wrenching cry in pain to be amplified to add more anguish to the scene. Watch the unfortunate incident right below:

Thoughts with Bernd Leno, absolutely awful injury similar to Zouma a few years back, will be out for some time pic.twitter.com/cgpxLg4dXJ

Graphic image ahead; Here’s how Leno’s leg landed upon colliding with the striker.

The severity of the injury was imminent when the Arsenal medical team set out to the scene with a stretcher. The 28-year-old keeper was duly transferred onto the stretcher and taken off the field. On his way to the sidelines, Leno engaged in a row with Neal Maupay and was seen pointing a finger at the Frenchman.

Cowards tackle. Leno right to call him out. pic.twitter.com/XHMgd53EuX

Arsenal manager provided an update on the shot-stopper after the culmination of the match. The Spaniard claimed Leno’s condition is unknown at the moment and some details will be shed by tomorrow.

Despite the Gunners struggling this season, Leno has been one of the standout performers of this season, only lying behind Newcastle’s Martin Dubravka in the number of saves.

After enduring a humbling defeat at the Etihad on the opening day of the restart, Arsenal’s fortune did not change as they endured a 2-1 defeat at the hands of Brighton and Hove Albion. Following the victory, the side completed a double over Arsenal this season.

After a goalless first half which included the injury of Bernd Leno, it was Nicholas Pepe who provided the breakthrough with a curling effort. The lead, however, did not last long as chaos, which ensured after a Brighton corner allowed Dunk to nudge the ball into the net.

To rub salt into their wounds, it was Maupay who struck in the first minute of stoppage time to send Arsenal into a world of dismay. The full-time whistle saw a blown-out scuffle which triggered after a foul on the striker by Mateo Guenduozi.

With Lucas Torreira already on the injured list before the restart, Arsenal have had three more casualties in just the matter of two matches in the form of Granit Xhaka, Pablo Mari, and Bernd Leno.

What happens if a Premier League player tests positive for COVID-19?